Whistler Blackcomb is the largest skiing in Canada, with 8,170 acres (that’s almost twice the size of Vail) with 37 lifts and 3 glaciers between the two interconnected mountains. Its one of the top ski resorts in the world, for size, terrain both on trails and off-piste, tame to steeps, with a super long ski season! 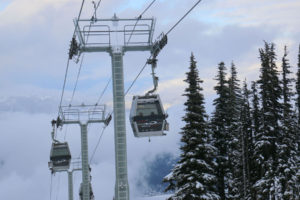 Whistler Blackcomb is the largest skiing in Canada, with over 8,000 acres (that’s almost twice the size of Vail) with 37 lifts and 3 glaciers between the two interconnected mountains, and 17 on mountain restaurants! Its one of the top ski resorts in the world, for size, terrain both on trails and off-piste, tame to steeps, with a super long ski season!

Whistler is European-like big mountain skiing on two grand peaks, Whistler and Blackcomb – which are very unique. Whistler has more undulating rolling trail skiing, while Blackcomb is more true fall-line terrain. Both have high alpine bowls and glacier skiing at their peaks. Riding three consecutive lifts climbing about 2,000’ vert each brings you to the high alpine, and long above tree line runs dropping through big open bowls down to groomed marked trails, ending into a beautiful pedestrian ski villages. Whistler’s Peak to Creek run is over 5,000′ vertical, and a leg-burning 7 miles long, like something you’d find in The Alps. Try it non-stop.

What makes Whistler “epic” besides the skiing, is the scenery, when the sun shines it’s amazing. So is Whistler’s resort village. You’d be hard pressed to find a more vibrant, activity-rich, lodging plentiful, culinarily sophisticated, shopping mecca, après-ski laden mountain village than Whistler. 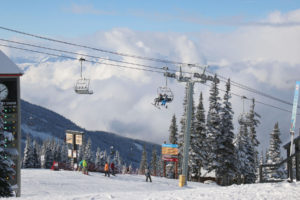 Whistler opened for skiing in 1965, as Garibaldi Lift Company, and has grown dramatically, to now include Blackcomb and Whistler terrain, modern lifts like the 2.75 mile PEAK 2 PEAK gondola. Whistler is investing $66 million in lifts and improvement for the 2018-19 ski season! Big money, big mountains, big plans…

Whistler is also known for big snow. Locals say it’s always snowing somewhere on Whistler or Blackcomb. Truth is they get crazy Pac North West weather, read: fog, rain, snow – all at once within the variable of 5,280’ elevation. Whistler tops out at 7,160’ and Blackcomb at 7,494’. Both mountains have wild steeps, 2,200 of their collective 8,171-acres are expert and extreme.

Wicked Steep – double black. Blackcomb has double black diamond terrain, among the gnarliest anywhere, like the legendary Saudan Couloir at 42% and Spanky’s Ladder, you need courage for these cornice drops. On Whistler’s side – West and Whistler Bowl are steep and usually deep. There’s also Whistler Heli-skiing with a 400,000-acre tenure, and backcountry cat-skiing as well if you don’t find enough untracked within the 8,171 acres.

Whistler Blackcomb makes many skiers’ Top 10,  hosted a Winters Olympics in 2010, and was bought by Vail Resorts in 2016, for $1 billion, so its now part of the Epic portfolio of 15 ski resorts, on the Epic Pass. 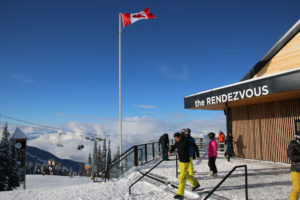 The mountain of Whistler was originally London Mountain, renamed for its whistling sound when it opened in 1965. The ski terrain came first, but the pedestrian village soon followed, with massive development in the 1980’s, with its unique Canadian car free alpine concept – mimicking the Alps. Whistler and Blackcomb (which opened in 1980) sparred in chairlift and marketing wars, battling over skiers, throughout the 1980’s, till their merger in 1986.

Whistler Village warrants serious après ski time and respect. Whistler’s heated pedestrian plaza is more of a ski city, well-designed by Intrawest, with over 200 restaurants, some of the best après ski bars on the planet like Girabaldi Lift Co and Steeps Grill and Bar right at the base of the slopes and the gondola.

Whistler has tons of condos, and top brand hotels from Whistler’s Fairmont, Four Seasons, Pan Pacific, Westin or Hilton; they all earn 5-stars as swank ski properties with ski concierge, and spas. Upper Village at the base of Blackcomb is perfectly ski in ski out. 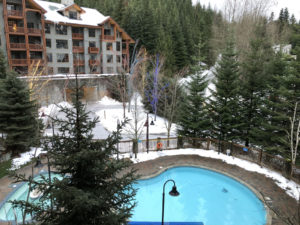 Whistler Creekside is the quieter side for lodging, and the original base of the ski area. There are a few iconic old alpine chalets dating back to the 60s, but the slopeside lodging here is modern and luxurious. First Tracks Lodge is perfectly located by the gondola as its name indicates, with an outdoor hot tub and pool. You can walk across the wood bridge to a petite pedestrian village with everything you need, grocery market, liquor store, ski shops, and a Starbucks, plus a Whistler Kids center – so its ideal for families. Nita Lake Lodge is another posh hotel at Creekside, not slope-side but on a spectacular lake – with a grand style lodge and beautiful suites. Creekside is a short bus ride, or a 5 minute drive to Whistler village.

Whistler’s events, freestyle skiing to film and music fests, are off the hook. Whistler does get busy, read: 2 million skier visits, but the terrain is absolutely epic! Whistler Blackcomb is the Top Canadian Ski Resort and one of The Best Ski Resorts in The World