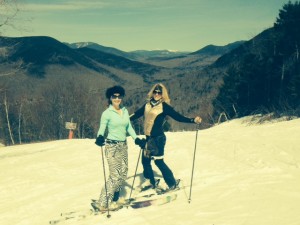 Don’t you love spring skiing? Warm temperatures meet a winter’s worth of snow depths. Ski conditions soften and so do bulky dress codes at the best ski resorts. From music to moguls to general mayhem – these spring fests are super fun:

Top spring ski fests in Colorado, Utah, California, and Montana:
Taste of Vail is a fun food, wine and ski fest – what could be better than skiing spring conditions followed by wine tastings and food from Vail’s top Chefs April 3-6!? Spring Back to  Vail midApril  brings live headliner bands for free concerts to Vail Village. Après ski at Vail just got big and FREE which rarely happens at Vail, right?! Look for parties on the mountain too – like  the Mountaintop Tasting at the top of The Eagle Bahn and Tiki & Tunes Luau at mid-Vail – top of Gondola One. 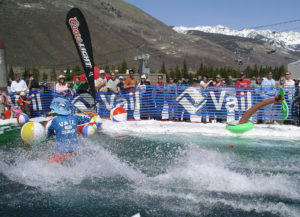 Vail’s World Pond Skimming Championships is the biggest, April 14 at Golden Peak. Enjoy a BBQ and beers overlooking the big pond where the best and worst) dressed in crazy costumes attempt to cross the big expanse of cold water to the cheers and jeers of a big crowd. Like everything in Vail, this pond skim is massive, so is the crowd of spectators.

Squaw Valley celebrates PAIN MCSHLONKEY for Shane McConkey, posthumously and humorously – skiers are encouraged to dress up in vintage gear and pay tribute 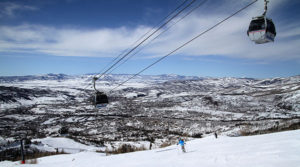 to the legendary free skier by going big March 18.

Steamboat’s Colorado Springalicious 39th annual cardboard classic is mid April  – locals recycle by creating box-cars to derby to fly downhill. The crashes are spectacular, so is the après ski scene at Steamboat. 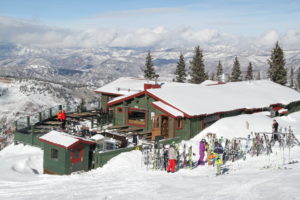 Aspen Highlands Closing Day is an elevated spring ski party – the spring ski celebration above 10,000’ in the Rockies gets wild, with ridiculous retro outfits, serious drinking, even Champagne spraying! Did we mention you’re at 10,000 feet?! High times in Colorado.

New England skiers know the best skiing is typically in spring. Put away the facemasks and hand warmers for much welcome warmer sunnier ski days. The hard snow softens, those man made base depths turn to cream corn by mid morning and the BBQ fires up mid afternoon for sun and fun by the slopes. Spring is also a time for pond skimming, zany costumes and competitions on the ski slopes, even tailgating in muddy parking lots. No one said Eastern skiers were sane? But they are hard core! Here are some Eastern spring ski rites of passage and grand season finales full of fun and games, music and grills. 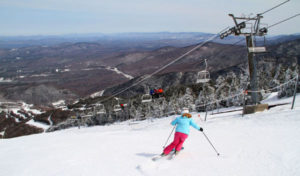 Cannon Mountain Bodefest is early April with Bode Miller himself.. I think he still “hates the media” so don’t bring the news crew but this is a great spring ski event and when the sun shines on cannon Mountain – #boom (cannon sound) .

Killington Bear Mountain Challenge NOR’BEASTER is early April as Bump skiers go all out on Outer Limits moguls. Cheers and beers (sponsor Dos Equis) flow at the base of this spring ski party. The Beast of the East will keep skiing in to May.

Sugarloaf Reggaefest – now in year 30+ is mid April when Jamaica comes to Maine’s mountains. Top reggae bands set up on the Sugarloaf beach by day, and in the base lodge by night for some rocking island music. Wear your tie-dye and tie on a good time. Ironically few reggae fest attendees ski, so this is a great three-day weekend for spring ski conditions at the Loaf, especially when the snowfields are open. 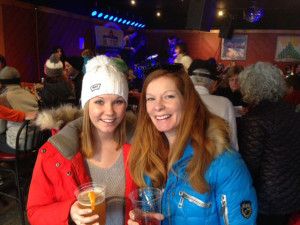 Loon has 80’s Day early April! Dress in your best (or worst) 1980’s outfit and get out on Loon’s soft slopes. Be totally rad for this spring weekend at North Peak, South Peak and Paul Bunyan’s for après ski! Loon Mountain’s Slushpool Party and Wet Tug-O-War is the following April weekend. 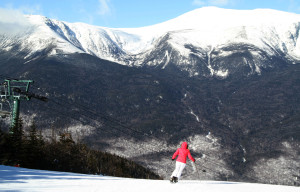 Wildcat has their Annual Cat Scratch Fever event early April as skiers compete to be the Cat’s Meow before the judges. If you’ve seen Wildcat’s Kitty Litter Box Derby in February, don’t miss this wild spring event at the Cat with live après ski entertainment in the Wildcat Pub .

Sugarbush Gelandesprung & Mt. Ellen End of Season Celebration is early April, this traditional ski jump event is a classic – to watch – even wilder to get sprung. 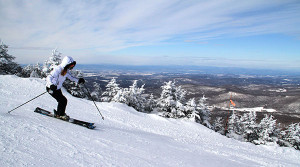 Okemo’s Slush Cup and Splash for Cash early April is a wet and wild good time with a pretty good pay day for the winner. Okemos 80 Retro Jam is mid April  – rock your most rad 80s attire – totally awesome dude as Okemo wraps their season!

Jay Peak has Pond Skimming and their Annual Tailgate Party mid April, so bring your bikini, beer and your bbq. 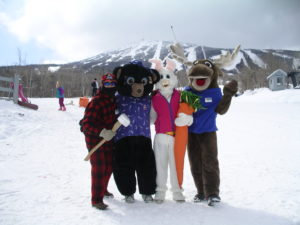 Easter Sunday at East Coast ski resorts brings sunrise services at Sugarloaf, Sunday River, Killington, Stowe and Jay Peak….. Most ski resorts have Easter Egg Hunts on the ski slopes for kids, and costume parades, even a visit by the Easter Bunny. Look for a few snow bunnies on the beginner slopes too! Easter weekend is the season finale Sunday for most New England ski resorts.

Extreme Sports, Even Skiing, With a Disability

Most Epic Ski Winter Ever?