Rocking Chair it’s called, sounds like a place grandma might sit and knit. But Rocking Chair has actually been the sight of everything from pond skimming to Seth Wescott’s World Cup Boardercross run, to the Simon Dumont Cup – where young skiers perform their latest greatest tricks in front of TV crews and crowds.

But this snow covered section of trail at Sunday River had far more humble beginnings. Fifty years ago, it hosted the very first skiers at Sunday River Skiway. A T-bar deposited those inaugural skiers up 1,000-feet on Barker Mountain, most wearing wooden skis made in nearby Paris.

The original Rocking Chair and neighboring Cascade trail, covered with a thin layer of natural snow on Dec. 19, 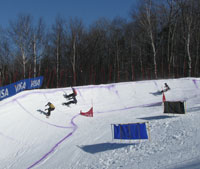 1959, were the start of what has become the second largest ski resort in New England. Flash forward fifty years, Sunday River is home to 132 trails on eight peaks served by 16 lifts, and one of the most sophisticated snowmaking systems on the planet powering 1,900 guns.

She’s come a long way as they say. So you can imagine the celebration planned for Sunday River’s 50th birthday party weekend Dec. 19. To commemorate the five decades of history, my friend and fellow ski scribe Dave Irons has written a book on the topic, “Sunday River, Honoring the Past, Embracing the Future.”

Now my history with Sunday River is not as long and legendary as Dave Irons who skied Sunday River on that at first day 50 years ago. Dave went on to ski patrol at Sunday River from 1968 to 1988, serving as Ski Patrol Director from 1971-82. 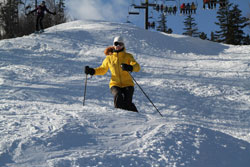 My first trip to Sunday River was in 1989; my brand new husband and I were visiting from Smugglers Notch, Vermont – our home ski resort at the time. It was March and the moguls were humongous on the hot new trail, White Heat – dubbed the longest steepest widest trail in the East. I was flabbergasted by the plethora of lifts – quads and triples no less. Coming from Smugglers, I was accustomed to aging doubles, so to me Sunday River was a mountain on the move.

Life was good at the River. Les Otten was in charge and charging forward with snowmaking, new lifts and new 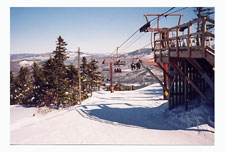 mountains. Aurora and Jordan Bowl were still mere plans on his office wall. Little did I know then that I would end up living in Maine, frequently skiing the superb snow made at this Maine resort which would expand to 671 acres, and writing this weekly ski column.

What I did know – Sunday Punch was, and probably still is, my favorite trail at 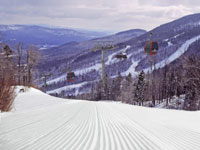 Sunday River. Perhaps that is because my grandfather told me it was his favorite, he remembered skiing Sunday Punch when it was added in 1961 along with Sunday River’s 2nd T-Bar.

Everyone has their Sunday River story, like those who had the opportunity to buy one of those great little Viking Village lots for $300 bucks back in 1965, or skied for $7 in the 70’s. Don’t you have stories about The River back in the today? How many clever ad campaigns can you name besides “Take me to the River?”

From Sunday River Skiway to The Otten Empire, SKI and ASC – American Skiing Company, to present day Boyne, Sunday River is one of the Best New England Ski Resorts.