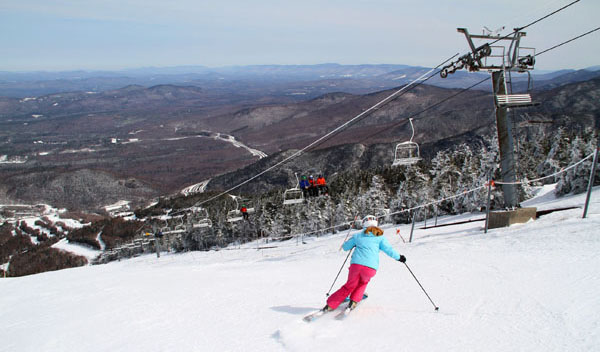 If you haven’t skied Cannon, you have missed out on a real NH ski mountain. Located in beautiful Franconia Notch Cannon is authentic, a real skiers place. New Hampshire’s moniker was the Old Man on the Mountain, a rock formation on Profile Mountain just before Cannon that is featured on NH license plates. While the old man has since crumbled, Cannon skiers and riders can continue to enjoy the legendary terrain and views of the Presidential Range, with some New England’s top ski trails for scenery and challenging slopes with an unspoiled atmosphere.

Cannon offers classic New England terrain from the panoramic 4,080′ summit served by NH’s only aerial tram, which originally debuted in 1938, with views of Franconia Notch and Lincoln and Lafayette. Cannon has the longest vertical in New Hampshire at 2,180′. Wildcat’s is close at 2,112′. 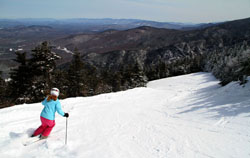 Cannon claimed some fame – Bode Miller learned to ski and race here. Steep fast trails like Rocket and Zoomer and Polly’s Folly are evidence of the core race terrain here. But Cannon also has intermediate and beginner terrain from the Tuckerbrook quad chair to the west with 14 trails. And now Cannon’s Mittersill, the 1941 ski area, has rejoined Cannon’s ski terrain with old school skiing served by a fixed grip double chair and a new Valar T Bar.

From Cannon’s base lodge The Peabody Express Quad launches skiers 3/4 up to the top, where you can connect to the summit Cannonball Express quad to great long trails like Taft Slalom, Ravine, Cannon, and Cannonball. On a clear day you can see as far as Burke, Jay Peak, Stowe and Sugarbush in Vermont – that’s how far north you are at Cannon. By far the most scenic is Vista Way, and the wildest is Kinsman Glades and Tramline – both black diamond narrow tree lined trails to skier’s right. Or ski Bode Miller’s mile, Upper Cannon to Middle Cannon to Avalanche back to the Tram. 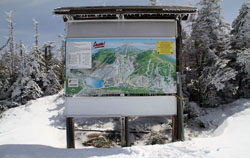 Cannon has great ski history. You have to ride the amazing Cannon Tram, for scenery and great top to bottom skiing, this first passenger tramway in North America opened in 1938, but has since been revamped. Cannon’s first trail – the Taft trail dates back to 1933. 2010 marked the revitalization of the original 1941 Mittersill ski area, started by Austrian Baron Hubert von Pantz. The classic Austrian chalet ski village and slopes first served skiers in 1946. In 2011, a new double chair opened for skiers and riders to once again enjoy this 86-acres of side-country ski terrain which is more au natural but now has snowmaking. Cannon’s Mittersill is where some of the first ski instruction occurred – The Franconia Ski School was headed by Swiss Paul Valar and Austrian Paul Kann who went on to found the PSIA.

Cannon is one of a kind, because its historical, scenic and state owned and operated. While Cannon is not fancy, it is steeped in tradition and has a very loyal following of ski fans. You will find all the skier services you need at Cannon, rentals, ski shop, restaurant, pub, kids programs, nursery, and a race league, along with super close parking.

Cannon is great for families – with its affordable lift ticket prices, on site learn to ski area at Tuckerbrook and a daycare facility. The Peabody Lodge has a big roaring fireplace in the center and a super sit down restaurant, The Cannonball Pub is perfect for a casual pub fare lunch and après ski with a view of the slopes and a great vibe of ski memorabilia and friendly folks, one of the best on mountain ski restaurants we have found! 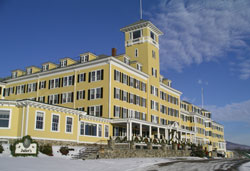 The New England Ski Museum is located at the base of Cannon’s Tramway to see Olympic medals of Penny Pitou and Bode Miller, plus 10th Mountain Division skis and uniforms.

Cannon is within White Mountain National Forest, which makes it beautiful – but no slopeside lodging is available. When visiting Cannon, you can stay at nearby Lincoln by Loon Mountain where there are so many condos, inns, hotels and resorts like Mountain Club at Loon just ten minutes away. Or you can find Cannon ski and stay packages at Twin Mountain or the lovely Mountain View Grand in Whitefield, New Hampshire.