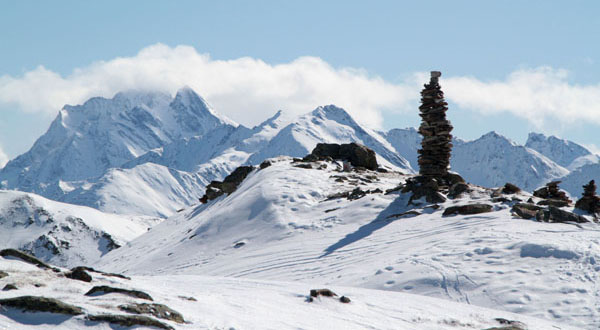 Don’t you wish Survivor would take its CBS show to the snow? For 26 seasons, the Reality TV series has been staged on some sandy beach, a sun soaked island, or warm weather safari. I vote that Jeff Probst put on a winter coat and strand his castaways in a ski chalet somewhere in the remote Alps.

It’s time to mix it up Mark Burnett, with Immunity Challenges involve sledding, snowboarding and skiing. Imagine how cool (pun intended) a ski off, sled race, or snowball fight to the finish would be. The winners of each Survivor Reward Challenge could be whisked away via helicopter over snowy peaks to some fantastic alpine spa for fondue, hot showers, hot tubs, mulled wine and a chance to whine about their fellow competitors by a fire wrapped in fur blankets.

I am not suggesting that the 20 Survivor players be exposed to frost bite or hypothermia, or risk freezing to death. Probst and crew will have to work out the details, build primitive but provisional chalets for each tribe, and maybe an igloo or snow cave for the Tribal Council Ceremonies. When the tribe has spoken and you are voted off the mountain, your torch is snuffed and you sled off down the snowy slope.

My point, we need more seasonality to Survivor, and other so-called reality shows, we need a real winter scenario. Snow, rime, and cold-hard reality would make such a riveting stage. Is anyone else tired of the same old tropical beach scene and bikinis after 25 seasons of Survivor? It’s time to feature some spectacular snow locale, leaving castaways in the cold to “out play, out winter and out snow plow” one another. Show us some serious winter survival skills. The Bachelor has taken to skiing in a few episodes, and it proved to be downright downhill funny!

Survivor’s latest Fans versus Favorites in the warm sunny Philippines seems like a yawn compared to my idea to go skiing. How about “skiers versus riders” in the remote alpine? Survivor Alps – the winter edition. Would you send in an audition tape to CBS in hopes of competing to become “Soul Survivor Alps” for a $ million and mountain bragging rights?

Read our ski vacation articles for tips on even where to go, what to pack for your ski trip and our Top 10 Reasons to ski plus our reviews on the top skis this year!