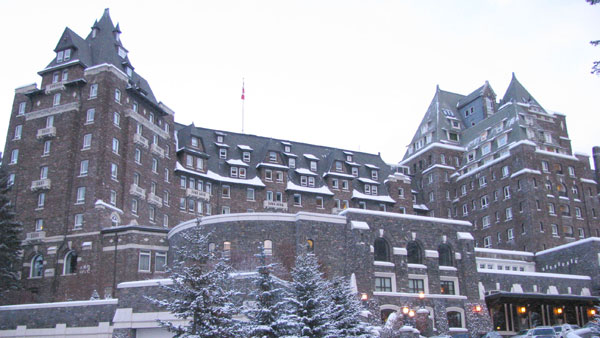 There may not be a more historic region in North America than Quebec City and Charlevoix of Eastern Canada. First discovered in 1608 by renowned world explorer Samuel De Champlain, this area quickly became a key seaport and the cradle of French civilization in the new world. Located on the shores of the mighty St Lawrence River, this destination is ripe to be discovered by history buffs and skiers alike. This central Quebec region promises four centuries of Canadian heritage along with an equally time-honored tradition of fine lodging and winter amusements – even Winter Carnival plus the usual tours and museums.

Le Château Frontenac is the granddaddy of accommodations in Quebec City, and the perfect place to stay during your Quebec ski trip. Our visit was in the celebrated month of February, on the heels of the world’s largest winter Carnival.

As we approached the ancient city, we immediately spotted the dramatic copper spires of the landmark Frontenac castle along the icy St. Lawrence. Dating back to 1893, this epic five star hotel towers over Quebec City’s historic district, within the stone ramparts of the largest remaining fortifications in North America. These original stone walls encircle the 2.9 mile perimeter of the illustrious old city where the hotel is located.

Le Château Frontenac is its own glorious monument, overlooking the St. Lawrence River and th 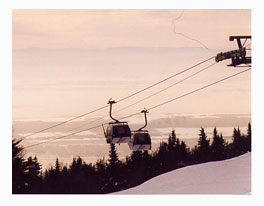 e oldest commercial port in America. The stone entry archway to the Château features the coat of arms belonging to the Count of Frontenac, the hotel’s namesake and Governor of France during the 17th century exploration of this new territory.

As you enter the famous Fairmont hotel, a grand lobby leads to stone and mahogany corridors of boutiques and galleries for the well-heeled inhabitants. As there are more than a few lounges and restaurants, you never need to leave the confines of this historic castle.

You are well advised to have the costumed bellmen assist you in finding your room amongst the 18 floors and 618 rooms of every shape and size. A few of the larger suites are set in the spectacular window lined circular turrets that create the unique rooftop profile that is so recognizably Le Frontenac. 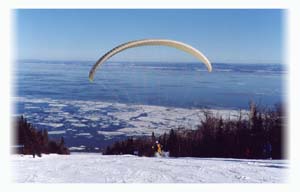 You can make an aerobic workout of the endless mazes of hallways, or visit the indoor pool, spa and fitness center.

Since our visit was in the winter, we kicked off our outdoor activities with a crazy toboggan ride, Dufferin Terrace. Just outside Le Château, we grabbed our long wooden toboggan (a relic from childhood memory) and embarked on an icy hike up a long plank of stairs. At the top we climbed aboard our sled, while the attendant held us back. He then released us to plummet down the frozen track alongside the River.

For the less adventuresome, browsing Quebec City’s boutiques, cafes, and museums can elevate the heart rate. A ride on the Funicular transports you in style (and saves you from a longer walk and many stairs) to Quartier Petit Champlain, where you can visit the glass blowing factory, and witness the well-preserved old port.

Within a half hour of Le Château Frontenac, you can partake in countless on-snow activities, from dogsledding, skating and snowmobiling, to cross-country and alpine skiing at nearby Stoneham and Mont Sainte Anne and Le Massif ski areas. The easy drive to these ski hills, from such a palatial setting, is the likely reason Conde Nast Traveler rates Le Château Frontenac in their top 10 Ski Accommodations in North America.

Following the St. Lawrence River 60 miles northeast of Quebec City is yet another castle perched high on a cliff overlooking the ice clad River. Le Manoir Richelieu is the older sister hotel to Le Château Frontenac and another member of the Fairmont Hotels family.

The original 250-room hotel opened in 1889. It was constructed of wood and burned to the ground in 1928. The following year, it was rebuilt of stone by Canadian architect John Archibald, to resemble a storybook style French castle. 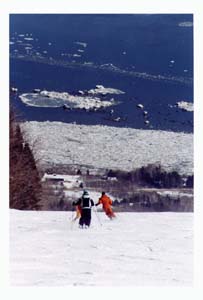 Today, the 405-room turn of the century hotel is as stately and elegant as ever. The modernization included three restaurants, an extensive fitness spa, and two swimming pools. From the magnificent lobby to the cigar room every common room awards yet another stunning view.

Le Manoir is located in Charlevoix, a region of stunning natural beauty serving as inspiration to artists and writers and a prime vacation destination since 1760. The area offers the perfect marriage of nature and culture. Sportsmen have flocked here to fish salmon and to simply relax in the invigorating surroundings for centuries.

Le Manoir Richelieu carries on this tradition of welcoming sportsmen wishing to explore the great outdoors from the comforts of a luxury hotel, (are you really a sportsman if you stay in a five-star hotel, I wonder?).

In summer, you can choose from whale watching cruises, fishing, kayaking and canoeing among the many rivers that run to the seaway. Right on the grounds of the Hotel are tennis, golf, horseback riding, hiking and mountain biking.

After a day of carving the ski slopes of Le Massif with the River as a stunning backdrop for the highest vertical drop in Quebec, skiers head for Le Manoir Richelieu soothing indoor pool. Our family made a beeline for the incredibly unique outdoor heated salt-water pool and the large steamy outdoor Jacuzzi.

If you are feeling in the need for pure pampering, (and who isn’t?), the Spa and Fitness Center has a menu of 22 treatments from massage to algae therapy to rejuvenate your body and soul. If you are feeling lucky, (and why wouldn’t you be?), the Hotel even has a Casino with Black Jack, baccarat, Poker and over 700 slot machines. The Casino fills each night, with an interesting mix of locals and visitors eager to make a big win.

Both of these remarkable Quebecois hotels perpetuate a tradition of old-world charm in harmony with the first class service you expect of a modern hotel chain. The properties share a legacy of grand architecture, and similar yet distinct views of the mighty St. Lawrence River – an impressive backdrop to these historical landmarks.