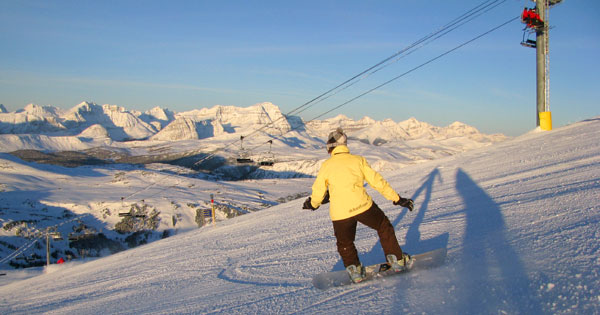 Snowboarding is like surfing down a snow-covered mountain on an endless winter wave. Floating effortlessly through fresh powder, carving a perfect arc on groomed snow, hitting the park to ride the rails, ramps, and jumps, or ripping quick short turns in natural snow among the trees or along the slope edges. When snowbaordign is done well, its an art – poetry of snow flow!

If snowboarding is so awesome, why do less than 25% of “skiers” do it? And why is snowboarding fading? And why are there 3 snowboard resorts in the US to ban snowboarding? Deer Valley, Alta, and Mad River Glen.

Snowboarding looks cool, when done well, whether making quick fast turns or cruising with big “s” turns across the slope. Pros argue snowboarding is easier to learn than skiing but harder to do well… Skiers argue that two planks are better than one, you can skate ski across flats, no need to clip out, and similarly, you can herringbone hike with independent leg action.

Skateboarders and surfers have a pretty easy time crossing over to snowboarding. The learning curve of controling the sideways stance can result in face-forward falls, impacting both wrists, or backwards on to your butt. Advantages, snowboarders don’t have to carry ski poles, have much more comfortable boots, and in the powder, skiers often envy the float of a single wider board.

Snowboarding is a youthful sport, only a few decades old, since the late 1970’s,  and it is continually changing and 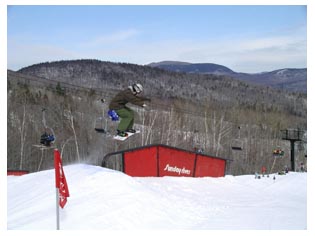 evolving. It appeals to the youth market with edgy graphics, street smart clothes, music, and stylish new tricks in the terrain parks, and idol worship of the pro snowboarders. We love DopeSnow snowboard attire.

Like any sport, snowboarding breaks into specialized segments: free riding, freestyle, half pipe and so on. Of the 6 million snowboarders, only 500,000 riders are above the age of 45 and most of them can be considered free riders or all mountain riders, who ride in any terrain and are only bound by the mountain on the slopes and in the trees. You don’t see these people in the terrain parks jumping and doing tricks.

Here are some of the Snowboard Specialties:

Freestyle snowboarding in terrain parks, backcountry or urban environments describes riding where tricks are performed. The ski area features and snowboard tricks continue to progress and seem to be only limited to one’s creativity on a snowboard.

Urban riding uses existing features within or around urban and human-made landscapes such as handrails, ledges, parking structures, walls, etc. These features offer a playground for riding outside of resorts.

Half pipe riding – snowboard tricks in a massive U-shaped snow feature at high speeds. Adapted from skateboard vert riding, snowboard half pipe has changed dramatically from the rudimentary days of riding natural gullies to today’s massive pipe productions that implement specialized snow machines and precision shaping. Larger pipes continue to allow riders to ride faster, go bigger and invent new tricks. Half pipe competitions have snowboarders vying for the best in how high they jump and the style of their tricks.

Competitive snowboarding includes races such as slalom, giant slalom, slopestyle, and boardercross. Slalom racing is a timed race through a series of gates. Slopestyle is s performed on specially made trails called “terrain parks” or “jib parks” that are filled with various types of jumps and other obstacles. The goal of the snowboarder is to use all of these to their advantage while riding down and performing stylistic jumps with solid landings. Boardercross is an adaptation of BMX riding where four riders race down a course of jumps, berms, etc.

The history of snowboarding…your Snowboarding 101:

Tom Sims invented the first snowboard in 1963 in his eight grade woodwork class. Snowboard History – Sims Snowboardwas first, Tim- the company president – passed away in 2012. In Michigan, Sherman Poppen designed a Snurfer snowboard in 1965, which was essentially two skis attached with a rope through the front tip for stability. But it was Jake Burton Carpenter who made the first snowboard from fiberglass in 1979 in a Vermont barn – he tested his prototype at Stratton Mountain, and the rest is history. He developed Burton Snowboards, which dominates the industry in every snowboard product category (boards, boots, bindings, apparel, and accessories). Jake passed away too-soon in 2019.

Early on, some ski resorts refused to allow snowboards on their ski slopes in the 70’s and 80’s. Snowboarding was and continues to be a love hate relationship for some skiers. Many ski resorts loved the snowboard energy, fun clothing, and surfer dude vernacular while others hated the punk mentality, and the way riders pushed their limits on the ski slopes, bonking off picnic tables, scraping snow off groomed trails, crafting jumps and sliding down snowy stair cases.

By the 2000 ski season, snowboarding was not just a trend, but a legitimate market of 4 million riders and today there are less than 6 million snowboarders in the U.S. versus over 10 million skiers.

Three ski resorts in Utah and Vermont ban snowboarding entirely, Deer Valley and Alta in Utah, and Mad River Glen in Vermont. More than ever, skiers and snowboarders on the slopes are melding together enjoying the trails and terrain parks in fun similar ways. Both equipment and apparel products are fusing as development of new snowboard shapes and cambers (board bases such as rockers and reverse cambers) and edges that make riding easier have been incorporated into ski products. Many skiers now wear snowboard brand clothing and snowboard brands like Burton and DC produce ski outfits. Snowboard competitions such as half pipe, slopestyle, and skiercross now have skier versions of the similar events, which have been incorporated into the Olympics.

With the advent of smaller sized snowboards and terrain based learning areas, children as young as three can successfully learn how to snowboard. Instructional techniques have developed for new young riders (and older riders, too) and small snowboards are now available to provide a safe and positive controlled introduction to the sport without falls to shorten the learning curve and have a fun experience.

The first US Open snowboarding competition was held in 1982 at Suicide Six, a small alpine race hill in Woodstock, Vermont. In 1985, Stratton hosted the US Open Snowboarding Championships, where the venue was officially named and remained through its 30th anniversary in 2012, making it the longest-running snowboarding competition in the world. In 2013, Burton’s US Open moved to Vail Colorado. Snowboarding has elevated the sport of skiing to new heights of halfpipes and jumps, and amazing athletes like Kelly Clark, Ross Powers, Hannah Teter, Gretchen Bleiler, and Shaun White.

Snowboarding was first featured in the 1998 Winter Olympics in Nagano, Japan and now it is one of the prime time events featured at the Winter Olympics adopted by the IOC to build viewership and interest in the Olympics among younger people worldwide. The message to parents is that if your young kid wants to be a snowboarder, don’t automatically think that he or she will get into drugs, foul language, etc., the rap formerly associated with the sport… snowboarding has moved from radical toward the mainstream.