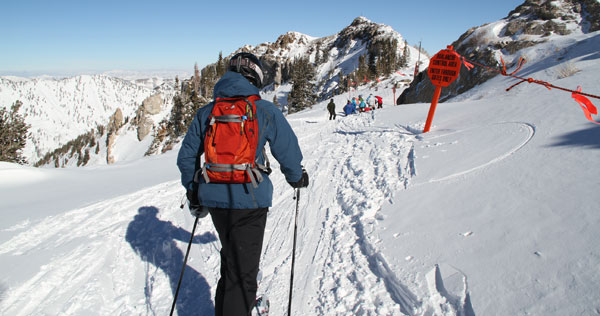 A ski movie that’s entertaining for teens, but also carries sufficient plot for parents? Not an easy find. The best PG ski movies for family movie night are perennial Warren Miller’s ski films But on Thanksgiving weekend, when we should have been skiing (but Mother Nature had warmer plans for us) we all gathered to watch “Edge of Never.”

Based on a true story, Bill Kerig (a passionate self proclaimed ski bum from Mass.) documents a young man’s visit to Chamonix – to ski the run that took his father’s life. Sound compelling? Even frightening? It is all that, and mountains more.

This film draws you in from the start. Fantastic footage of Chamonix France, freeskiing legends like Glenn Plake and Mike Hattrup, all brought together to provide closure to a family hit by tragedy. Kye Petersen is the young man, at age 15, who travels with the famous pro skiers and film crew to connect with his father’s memory and retrace his last moments on the mountain that ended his ski career and life.

My teens could relate to this ski movie since Kye Petersen is a typical teen, loves to ski the terrain parks at Whistler, wears flashy ski fashions and twin tips. But there is a compelling undercurrent as this fresh young skier lost his father, big mountain ski legend Trevor Petersen, in 1996 when he was just a little boy. Now, almost a decade later son Kye is facing his own fears and the dangerous slopes that claimed Trevor’s life and countless others.

Parents will approve of this movie as it portrays the sobering danger of high alpine skiing, the seriousness of avalanche and crevasse risk. They refer to Chamonix as the Death Sport Capital of the world.

Experienced alpine guides teach young twin tipper Kye all the technical tips he will need, and coach him on the necessary caution and careful preparation required when mountaineering outside of traditional groomed, marked and patrolled ski area terrain. All this is in the days preparing for his descent down the couloir that proved deadly to his dad. The anticipation is palpable.

“Edge of Never” is a coming of age film, a cautionary tale of the risk and rewards of pursuing your passion and a touching tribute to family love and the legacy that surpasses mortality.

And if you think Glen Plake is just a freaky freestyle skier with a Mohawk, watch his mentoring chats with young Kye and you may change your mind – probably not your hairstyle however.
|
Motherly Warning: “Edge of Never” is not appropriate for young children given the maturity of the story line and a few scary moments on the slopes.