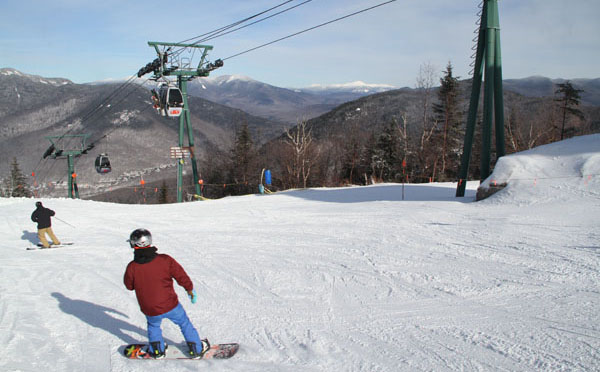 Snowboarding, riding, one planking – the relatively new sport of snowboarding has lots of names and plenty of popularity – one of the fastest growth curves in sports reaching over 7 million snowboarders in just three decades. Since the first snowboard debuted in 1963, designed by Tom Sims, to Sherman Poppen’s snurfer in 1965 and Jake Burton Carpenter first fiberglass snowboard in 1979 – sliding downhill on a single board has taken off and turned the sport of skiing around.

One of the common assumptions about snowboarding is that it’s easier to learn than skiing. The claim is that you can learn to ride in just three days. While that is a slight hyperbole (snowboarders tend to exaggerate their skills and their air time), many snowboard instructors stick to this claim that after three days of snowboard instruction you can competently turn in both directions, heel side and toe side, control your speed, stop, load and unload the chair lift.

Snowboarding is not as popular as skiing, but it is prevalent at most ski resorts, with about 20-30% of the ski population on one board instead of two. Snowboarding is far more popular out west, where powder conditions and a surfing culture are more prevalent. Resorts like Mountain High and Mammoth in California are closer to 40% snowboarders versus Eastern ski resorts where the numbers are nearer to 20-25% riders. Three ski resorts in the US ban snowboarding altogether – Deer Valley and Alta in Utah, and Mad River Glen in Vermont– they all claim to be purest ski areas, preserving the tradition of skiing by not allowing snowboarding.

Snowboarding has a few advantages over skiing, the wider board floats over snow – powder or spring corn better than two narrower skis. Snowboards glide over jumps and rails better too – but that is for more expert level riders. Riding chairlifts and t-bars, and traversing over flat ski trail sections are considerably harder on a snowboard than skis since you have no independent leg action until you un- strap one foot from your snowboard binding.

Snowboarding for the first time, learning how to snowboard, can be very intimidating to newbies, “never evers” as the ski industry calls them. Kids should start snowboarding at about age 5, when they are strong enough to get up from a fall, no longer subject to diapers or tearful fits, and independent from their parents. Here are a few tips to help you learn to snowboard as a first timer:

1. Learning how to snowboard requires strong physical condition. Like skiing, snowboarding is an active sport that requires core strength and strong quad muscles and knees. Balance is key as well, you need to remain centered on your board as your hips pivot to move the board below you.

2. Get a snowboard lesson. Learn to ride from the experts. Don’t let your friend teach you or you could break both wrists. Snowboard instructors start you off slowly, just standing on your board, familiarizing you with your bindings, board and equipment, to slide slipping and gently pointing your board down the hill to glide down the beginner slope at a controlled speed. You won’t be ready right away to load and ride a lift, never mind stand up and slide down the off ramp at the top of the mountain with one foot in and one out of your snowboard binding. Proper technique and an understanding of initiating toe and heel side turns is key from the start and will help you develop good snowboarding skills.

3. Get proper snowboard gear. You don’t have to go out and buy brand a new snowboard and boots for your first time. Rent from your local ski shop or the ski resort. The snowboard boot is the most important part of your gear – comfort and support are key. Good news, snowboard boots are for more comfortable and less bulky for walking that ski boots. Snowboard boots should fit snuggly to transfer the flex, turn initiation and power from your legs to your board. The Snowboard shops guys will suggest the appropriate length snowboard for your height, weight and skill. they will also help determine your snowboard stance, traditional or Goofy foot – right foot back or front as you head downhill. They will instruct you on how to attach and take off your binding – there are several different style from clip in to straps.

4. Get in the snowboard zone with the right attitude and expectations. You will not learn to ride the mountain in a day, but you will learn to sideslip, stop and hopefully turn both ways on your snowboard in your first lesson. Some riders have a hard time turning into the hill- toe side turn, while other have more difficulty turning their back to the slope and making a blind heel side turn. If you are athletic, optimistic and game, you should be able to ride the magic carpet and descend the beginner slope for several runs. Some snowboarders ride the chairlift in the first lesson, the T-Bar is very tricky on a board and takes real skill.

5. Loading and unloading the chair on a snowboard is tricky, it requires quick maneuvering and balance as you descend a snowy slope with one foot in and one foot out of your binding. Fixed grip chairlifts comes around the bull wheel quickly so you need to be smooth and swift.

6. Wear layers since you will be working hard, falling down and getting back up repeatedly (yes, it’s inevitable) and breaking a sweat. Quality fabric in ski attire that wicks away moisture is wonderful – sure beats a big cotton hoodie that traps moisture and feels very bulky as it gets wet and snowy.

7. Snowboard wrist guards are a smart idea – so many people injure their wrists in a forward snowboard fall- so “stomp guards” or wrist guard protection for snowboarders could spare you on forward impact (an you can still drive, type, etc when you get to work on Monday). Similarly snowboard fanny pads or snowboard butt pads may look silly but save your…. you know what.

8. Continuity is key – three consistent days on a snowboard can do wonders. A high percentage, like 60% of new snowboarders give up after day or two – if you aren’t one of those statistics you are well on your way to surfing the snowy mountain

9. Start snowboarding at a small ski area, you don’t need a big expensive resort or a ski area with a huge terrain park for your first few snowboarding days. You can save money, master the basics, and work your way up from bunny hill to green circle to blue square trails and eventually black diamonds, moguls and terrain par features.

10. Save some energy for “après ski” (no, they don’t call it “après snowboard”) arguably one of the best aspects of the sport.

For more tips on learning to snowboard, especially how to teach your kids to snowboard and finding the best snowboard camp for your kids, see all of our Family Ski Tips.