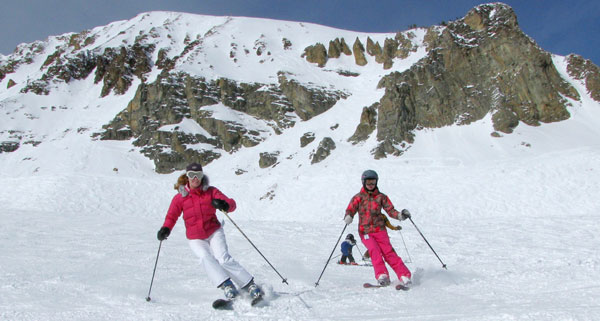 How safe is skiing and snowboarding?

Skiing looks dangerous, but it is in reality a relatively safe sport. In fact, you are far more likely to have an accident on the way to the slopes than on the ski trails. Like any activity, you can reduce your risk of injury (or worse) by taking precautions and Knowing the Code.

Here are some facts about ski safety and some tips on safe skiing:

The National Ski Area Association reports the rate of fatalities is .78 per million skier/snowboarder visits. With over 60 million skier visits, and 47 ski related deaths, less than 1 in per million. On our roads, 160 people die per million drivers, according to the National Highway Safety Traffic Administration (there are an average of 92 fatalities on U.S. roads daily). Compared to the sport of skydiving, skiing is ten times safer, there are approximately 30 deaths from skydiving per 3 million jumps annually (10 per million). 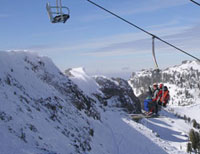 Just like driving, there are ways to improve your personal safety on the slopes.

Skiing within your ability is a big one. When you are cruising down a ski trail, you need to think “if I were to catch an edge and fall right now, would my momentum carry me into the trees?” If the answer is yes, you need to bring it down a notch, or three. You should always be able to control your speed and stop to avoid an obstacle, another skier, or a tree – which never move out of your way by the way.

Hard to argue that helmets do not make you safer when skiing, but snowboard and ski helmets have their limitations and are generally rated for impact of about 15 mph. The average skier skis at speeds of 20-35 mph so the helmet is not going to save you in a collision with a solid object, like a tree or lift tower. Among the 47 ski deaths in 2011, 21 were wearing a helmet. As one ski patroller told me, “People should always ski as if they are not wearing a helmet.”

Fellow skiers say helmets are a lifesaver, but I worry that skiers perceive their helmet as the ultimate safety device, which it is not; it is merely a layer of protection. As Dr. Jasper Shealy indicates in his 30 years of ski safety research, “There has been no significant reduction in fatalities over the past nine seasons even as the use of helmets overall has increased to 57 percent among skiers and snowboarders. This trend emphasizes the importance of not increasing risk-taking behavior simply because you are wearing a helmet. Skiing and riding in control is essential in improving slope safety and reducing fatalities.”

Speed – check it! With today’s perfectly groomed wide boulevard style trails, skiers and snowboarders can ski at very high speeds. You need to be mindful at all times that an unexpected change in surface conditions or a collision, or just losing control of your ski or board, can cause a high speed fall and impact.

Have control always, ski within your ability level, always be able to stop, look up before entering a trail or pushing off, avoid the skier below you, and don’t ski too close to the side of the trail. All these tips are covered in the 7 Point Skiers Responsibility Code. If your kids are doing tricks in a terrain park, they should wear helmets to protect against head impact, and they should start small and gradually work their way up to bigger features which can obviously mean bigger falls. Skiing continues to be a relatively safe sport, and you can control a large degree of your fate on the slopes.

See our Tips on Ski Etiquette and Lift Lines