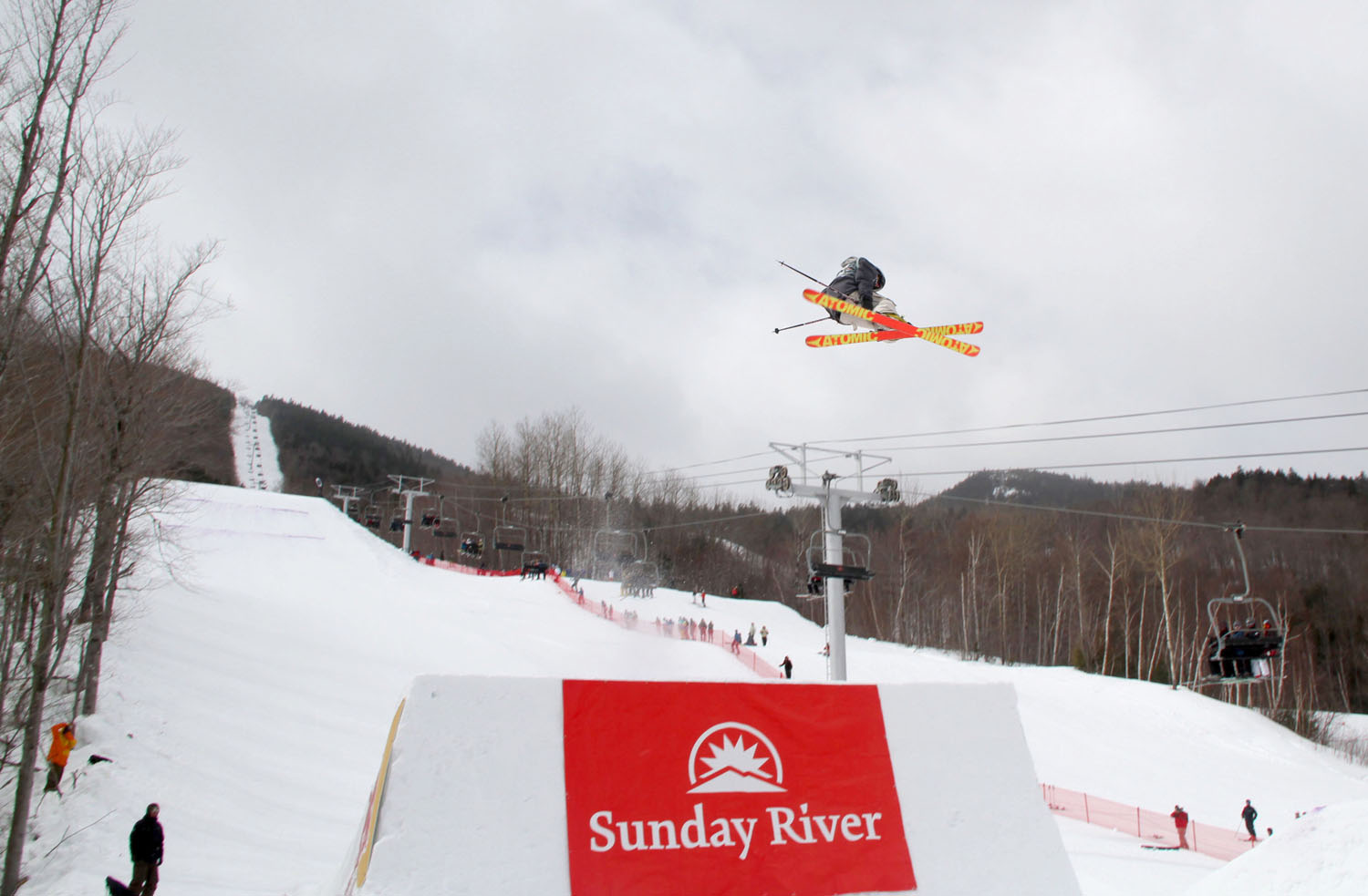 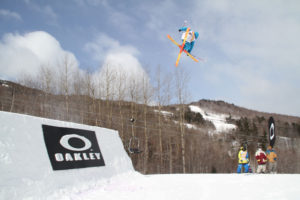 Word from Sunday River is there won’t be another annual Dumont Cup at Sunday River Ski Resort in Maine, the 7th in 2015 was the last. Since 2008, Dumont Cup has been the East Coast Free Ski Pro Am Ski event to see hosted by Simon Dumont. The future of the free skiing event is up in the air, pun intended. It seems Simon Dumont may have retired as freeskier and host of the Dumont Cup at Sunday River. The pro am free skier event has served as a discovery ground for new talent, and a big snow show on the East coast for almost a decade. It seems Simon Dumont’s new passion is photography over free-skiing, but we can’t help run film in our head of past Dumont Cups. 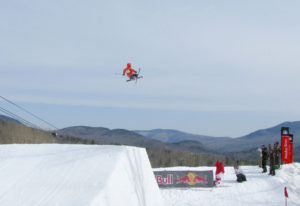 The Dumont Cup quickly became one of the biggest free ski event, attracting international talent, and offering an opportunity to see the top free skiers from XGames Aspen and the Olympics. The Dumont Cup has also proven itself as a predictor of Gold Medalists and Olympians, with skiers like Nick Goepper, Gus Kenworthy and Joss Christensen hitting the podium at Sunday River before and after Sochi. These skiers are buddies with Simon Dumont, dubbed the Godfather of free skiing. They roll deep, they’ve got swagger and they are friendly competitors with the host and kingpin – our boy from Bethel, Simon Dumont.

The Dumont Cup is the coolest pro am event in the East that attracts the biggest stars in slopestyle, one of the best freeskiing events in the country! This is your chance to see the hottest names in free skiing (up close and in person) before and after they hit it big, think the Sochi Winter Olympics. Simon Dumont did not compete at Aspen’s XGames or Sochi’s Olympics (even though he petitioned the IOC to include ski slope style and halfpipe for this first ever Winter Games) due to an injured ACL, he is however the host of his signature Red Bull event – Dumont Cup. Sunday River has a reputation for hosting huge Red Bull sponsored events, like Frozen Rush. 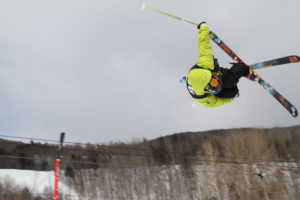 Since Dumont Cup 2014, the free ski event has been held on Simon Dumont’s designed terrain park trail T72 at Sunday River – which is located between Dreammaker and 3d on North Peak. T72’s 15 acres was laid out by the X Game winner Dumont featuring a jump line, 500-foot superpipe, and rails.

The 5th Annual Dumont Cup at Sunday River on March 29-30, 2013 brought bright blue sky and sunshine, and a slope style course on Rocking Chair Park with monstrous 75′ jumps that towered above the Barker quad lift towers, plus shooter rails, stairs and cannons. The winner was Nick Goepper from Indiana – taking $12,000 cash at the Red Bull Signature Ski Event. His switch dub insanity was huge. Gus Kenworthy took 2nd, and Joss Christensen took 3rd in front of a field of sun worshipping skiers and fans. Ironically, this is the same roster of winners from the previous Cup, with Gus and Nick trading up the top spot, Goepper won the 3rd Dumont Cup!

The 4th Annual Dumont Cup on March 23-24, 2012 at Sunday River saw Gus Kenworthy as winner, with Nick Goepper taking 2nd – defending his 2011 title, and 3rd place went to Joss Christensen. Simon Dumont was not able to ski in his 4th Annual Cup for the first time, Dumont tore his ACL during practice at the Euro X Games in Tignes in early March, then flew to Vail and underwent surgery at the Steadman Clinic, so he hosted his event from the podium, sporting crutches instead of ski poles, so no big tricks like he had done for his inaugural three Dumont Cups. 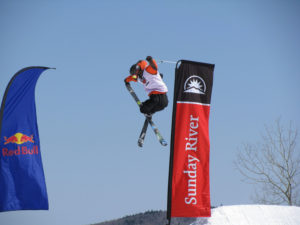 Simon Dumont started skiing at Sunday River when he was three, like many Maine kids. But Simon went on to hit it big, winning Gold at The Winter X-Games, spots in feature ski films, and a Guinness World Record for launching 35’ above a quarterpipe at his home ski area in April of 2008. Dumont has also bagged a bunch of sponsors (Red Bull, Target, Kicker, Salomon, Oakley, Nike, Giro,) and appearances on TV shows: Ellen, Late Night and the Today Show.

So yeah, Simon’s pretty famous, more so in the international freeskiing world (Sweden, New Zealand, Whistler, BC)than in Maine. But his annual Dumont Cup pro am slopestyle event at Sunday River, which he started in 2009, brings a bunch of fans who come out to see Simon and his fellow pros.

Francis Dumont, Simon’s father, said, “Simon doesn’t get much down time, even when he’s home he is surrounded by all his friends, he’s skiing with them, he’s hosting them, he stays super busy. He just keeps pushing.” His parents, Francis and Barbara Dumont are hard workers too, currently they operate a restaurant called Flounders in Englewood Florida on Manasota Key. 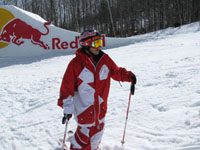 Simon has always pushed the limits, and excelled at sports from a young age in Bethel playing soccer and golf, to gymnastics where he honed his aerial skills that allow him to focus as his spins and flips several stories above the ground.

Brian Schroy grew up with Simon in Bethel and recalls his 720’s and backflips on rollerblades, and on snowblades before he joined the freestyle team at Gould Sunday River. Schroy said Simon was always fiercely competitive, pushing himself and the sport.

“Simon is the leader, he goes bigger than anyone else in free-skiing,” said Henrik Lampert (aka “Henrick DaRockstar) of Manchester by the Sea.

Tom Wallisch (aka “T-Crack among other nicknames) won the 1st Dumont Cup. He describes his free ski buddy, “Simon is kind of a jerk, just kidding. He is a really good guy, he loves to ski and he is so competitive that he pushes us all to ski better.”

Jossi Wells of New Zealand said, “Simon is really a nice dude, we really are best friends. We all have stinky socks, but we put up with each other through everything. Oh and I don’t drink so they love that I am the DD.” 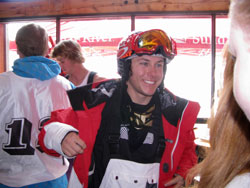 With such celebrity status, and a crazy travel schedule, when does Simon say enough?

“This is my downtime, being home with my friends and family for Dumont Cup,” said Simon. During the 2nd annual Dumont Cup, Simon insisted all his pro friends ski Sunday River’s Agony, the monster mogul trail under the Barker Quad, just for fun, a break from training on the slopestyle course.

Jarod Richmond, former snow reporter for Sunday River said, “It’s awesome that Simon comes home to showcase the best amateur talent in the east, and brings all his pro friends. Simon was discovered here, so this opportunity is great for other kids, like the Aspen Open of the East.”

Dumont said, “As I came up through the ranks, I had to travel to the west coast for events. I want to make it easier for local kids to break in to the circuit, and save their parents money from having to go to events so far away.” Dumont made his first X Games appearance at 15, and won his first Gold at 17.

“My hope is that everyone continues to have fun at The Dumont Cup, that they are doing what they love, that they are passionate like me. This event is going to become bigger and better each year,” said Dumont. “Sunday River will always have a place in my heart.” The Dumont Cup is now a recognized Platinum Event by the World Association of Freeskiing.