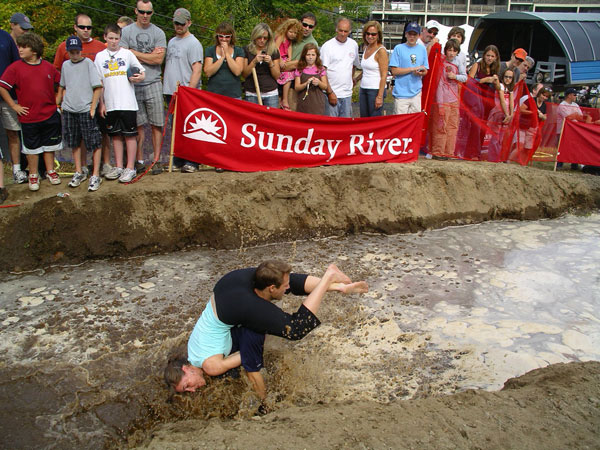 Imagine winning your wife’s weight in beer and five times her weight in cash for carrying her three football fields length, over a few logs, a sand trap and a mud puddle. Does that sound like a really fun time or fast track to divorce? The 21st annual Wife Carrying Competition at Sunday River is Columbus weekend in October, Friday October 9, during peak foliage, and Sunday River’s Fall Festival. This 2020 Wife Carrying Comp will include social distancing and limited spectators. Masks are required at all times, except when competitors are completing their timed run. Couples will race against the clock, rather than head-to-head. The  fastest timed couple will be the champs. Another new pivot is the debut of a new Couples of Wife Carrying mockumentary that weekend in Bethel.

Since 1999, “The North American Wife Carrying Championships” draws 50 competing couples and a huge crowd to the slopes of Sunday River in Maine. Surrounded by peak fall foliage, Columbus Weekend is the annual wife carrying event that you have to see to believe. Picture throwing your wife over your shoulder and hauling her around with her legs around your neck and her arms around your waist. That’s the classic “Estonian Carry” that allows the man to keep his hands free to forage obstacles over the 278-yard course of deep grass, dirt, logs, and the infamous “widow-maker” water hazard where your wife’s head will likely get dunked and dirty. It’s a scrappy fight to the finish, last year’s winners crusehd the compettion in under a minute, often in under a minute!.

This crazy couples race roots back to 19th century Finland. Legend goes that “Ronkainen the Robber” tested Nordic men before admitting them to his rogue band. To prove their manly mettle, burley men ran a rough course with a woman grabbed from a local village on their back. This primeval pursuit is re-enacted to this day in Finland at the annual World Championship. Sunday River’s winning couple gains entry to the following summer’s final Finnish competition, in addition to the prize of racks of beer and a pile of cash – based on the wife’s pre-event weigh in. Interesting point: you do not actually have to be married, so you could literally pick a girl up in a bar and carry her through the course (must be over 21 and consenting).

Watching the Wife Carrying Championships at Sunday River, I recommend being a spectator instead of throwing your relationship around. I have seen some muddy angry wives at the finish line, and some gnarly injuries too. The Columbus Weekend event coincides with spectacular foliage in the Maine mountains, and Sunday River’s Fall Festival with chairlift rides, lift serviced mountain biking at Sunday River, horse drawn wagon rides, an Arts and Craft Fair, and Cornhole Championships on Sunday – all at the base of the ski slopes. While our kids would have loved to see Daddy carry mommy through a messy mountain course, my husband and I made a pact over a Maine micro brew while witnessing the wife-carrying that our vows should have included “Til death or ’til you drop me in the mud do we part.”

See why we love The River and our Top Reasons to Ski Sunday River!