Christmas approaches and the kids are bubbly with questions about Santa and how he manages all those elves, not to mention the logistics of the North Pole, I find myself scrambling for answers.

Our kids, having unearthed the mystery of the mall Santas, had become a bit jaded. I thought a trip to the North Pole might help restore their faith in the magic of the season. 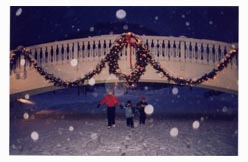 So on a frosty December evening, we ventured to North Conway and the Conway Scenic Railroad station, with our kids in tow. We lined up, with dozens of anxious families for “The Polar Express, Journey to the North Pole” the annual re-creation of the famed children’s book.

“The Polar Express” story, by Caldecott Medal winner Chris Van Allsburg, is about a boy’s friends “growing out” of Santa Claus. But this little boy believes, and his faith is rewarded Christmas Eve when he is awakened by a steam train that pulls up in front of his house and takes him to the North Pole to meet Santa himself.

Awaiting our own train ride to the North Pole, kids were dressed in their warm wintry pajamas, complete with fleecy robes and slippers. “They must have read the book,” commented my son.

We had our own treasured copy of the beautifully illustrated “Polar Express” and watched the popular movie starring Tom Hanks as the Conductor as soon as we received our confirmed tickets.

The conductor called out, “All Aboard” as we stepped up to our train car. A few flakes of snow were beginning to fall; a delightful omen to a magical night. 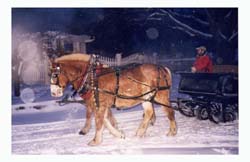 We got comfortable in our seats as the train whistled then chugged along the tracks. Darkness settled outside and the lights of North Conway flickered through the ice-glazed windows. But we were toasty warm inside the heated train car.

Soon Chefs in tall white hats came through the car serving us nougat candy and hot cocoa, which was “as thick and rich as melted chocolate bars.” My daughter squealed with excitement, “So far it’s just like in the book Mom.”

As the train steamed along, some families sang Christmas carols. Our son was glued to the window, watching for the wolves he had read about. My husband and I resisted pointing out familiar geography to each other and did our utmost to enter the magical spirit of the journey. 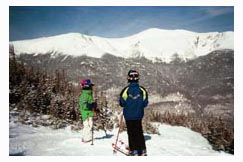 In a half-hour, our eagle-eyed son cried “wolves,” and everyone in our train car peered out for a quick glimpse of a few wolves standing in the dark forest. It appeared we were indeed approaching the wilds of the North Pole.

It was a lengthy trek, really just about an hour – which surely seemed like an eternity to the restless young passengers heading to Santa’s lofty location at the top of the globe.

The train slowed and the Conductor announced “North Pole.” There was a hush among the train full of kids, immediately followed by their outburst. “Look, elves!” they shouted as dozens of red clad characters emerged from the snowy woods.

Elves of all shapes and sizes, with the biggest smiles this side of the equator, approached the train doors to greet us. Santa’s gleeful helpers guided us by the light of their lanterns to the North Pole theatre.

What followed was a dramatic reading of “The Polar Express” in their decorated North Pole lodge and a special surprise for the children, including the presentation of the first gift of Christmas by the Jolly Man himself who arrived by sleigh.

On our train trip back to the station, our kids were weary from all the excitement of the evening. Some of the children, all snuggly in their footsy pajamas, fell asleep to the click-clack sound of the train, with sugarplum dreams in their heads – no doubt.

Even our son, who is quite a skeptic, was too tired to make any inquiries. He clutched in his hand a silver sleigh bell from Santa’s reindeer harness.

Our children will not soon forget their magical voyage through the White Mountains. We made an extra special weekend of it by renting a spacious condominium in one of my favorite winter towns, Jackson, at the historic Eagle Mountain House.

We made some early season ski runs at Wildcat, and then shopped  North Conway outlets for holiday gift purchases.

Our Polar Express weekend was the perfect precursor to the holidays. It was an early December getaway to the ski mountains, and a time-out from the hectic pace of the season. The storybook come-to-life train ride helped put the magic back into the holiday for our kids and reminded us adults of the importance of childhood beliefs.

Each year we will remember our wonderful Journey to the North Pole as we read “The Polar Express” and unpack that special bell from the boxes of holiday decorations.