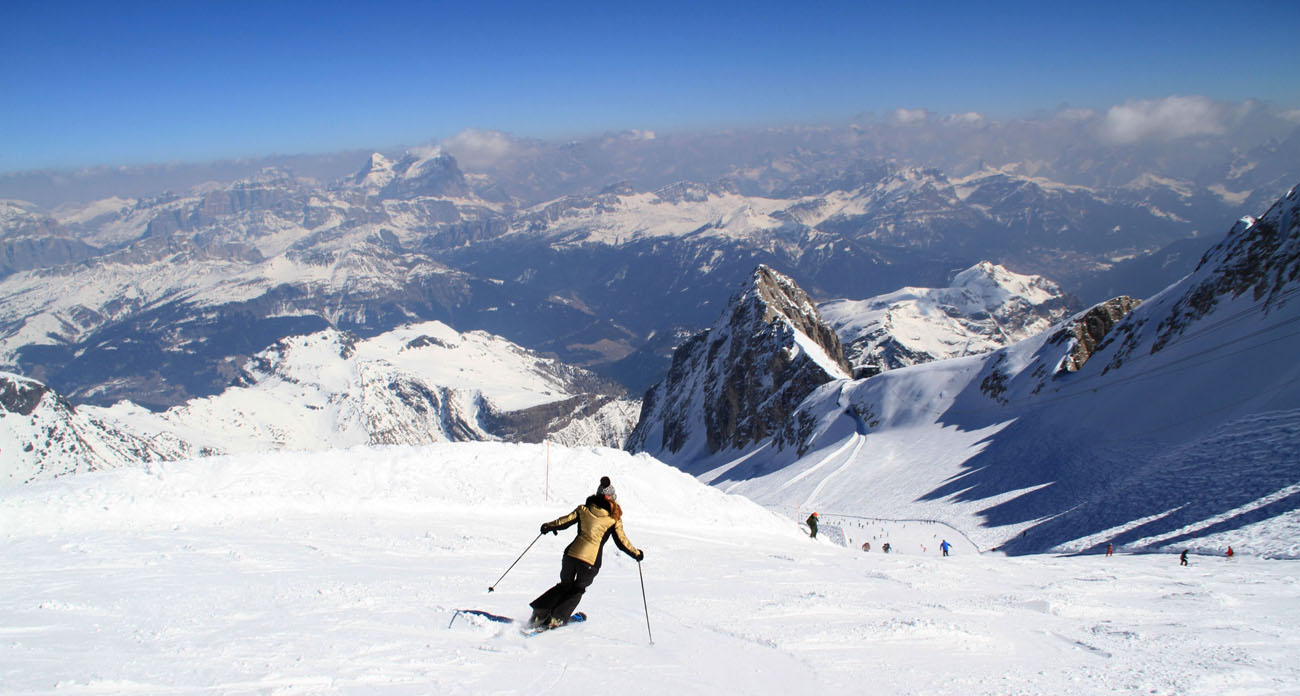 The most spectacular skiing in the Dolomite Super Ski Region is Arabba and the Marmolada, a long high elevation run reached by a three stage Cable Car to 3,342-meters, 10,965′. This peak, Punta Rocca, offers a panoramic summit, and a long descent on the Bellunese, 1,000-vertical meters (3,200’)  down the Marmolada Glacier to the Fedaia Pass. The skiing around the rest of Arabba is sprawling from Porta Vescovo to Passo Pordoi.

Arabba is part of the Sellaronda – the 42-kilometer ski around the Sella massif that spans many ski areas within the Dolomites, which many people like to ski in a day – in 14 lift rides. So Arabba sees many skiers passing through on their circuit, Sellaronda Green Route is counterclockwise skiing towards Belvedere and Canazei and Val Di Fassa, while the Orange Route is clockwise for the Sellaronda from Arabba to Alta Badia’s La Villa, Corvara and Colfusco. You must do it, a skier’s bucket list item…but it can get crowded.

Explore the lifts and trails in Arabba, after skiing Sellaronda, or during your circuit to break away from the pack. Arabba has fun parks, and great ski trails. Arabba, Val Di Fassa and Carezza offer a maze of ski lifts going off in every direction from the valleys, connecting the peaks. The trail maps can be difficult to read, with Italian and German names, and lifts intersecting, even passing over one another. But the views are stunning in every direction too.

Enjoy a delicious Italian lunch at one of Arabba’s 19 on mountain rifugioi, huts or chalet restaurants in the region. On sunny days, the sun decks at each chalet offer tables and chaise for sun bathing. Don’t be surprised when they play 70-80’s American pop, BeeGees and Madonna.

The scenery is a highlight of skiing in Italy’s Dolomites, skiing by mountain churches, farmer’s summer cheese huts covered in snow in winter, hearing the music from the sun decks of chalets as you pass by, and of course drinking in the spectacular views of the dramatic jagged Dolomites. Its La Dolce Vita in Italia.

For 4-star family friendly lodging near Arabba’s ski slope in San Cassiano, the Hotel Ciasa Salares has a beautiful spa, pool, excellent dining and mountain views. A family ski trip to The Dolomites should include skiing Alta Badia, and Val Gardena – which are all connected by lift in the Dolomite Super Ski Region. You can also ski Cortina, on the same lift ticket, but not interconnected by ski lifts.