Biggest Ski Resorts in the World

Skiers often ask us our favorite ski resorts? And we have our best family ski places in New England, Favorites out West in the Rockies, the Top Ski Resorts in Canada and the Best Places to ski in the Alps.

The next ski questions is what’s the biggest ski resort in the world? Here’s our Top 10 Biggest Ski Resorts in The World! 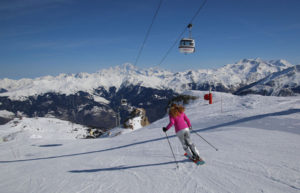 1. Les Trois Vallées France
France has the world’s biggest linked ski area, Les 3 Vallées with almost 500 kilometers of skiing, we skied the three valleys last season and can attest to the alpine terrain – its awesome and spans villages ranging from chic Courchevel to less charming Les Menuires, beautiful Méribel, and high-altitude Val Thorens. It’s huge, French and fabulous – with hundreds of on mountain chalets and tons of off-piste terrain!

Where to Stay at 3 Vallées: Aman Le Melezin in Courchevel 1850, or Hotel Pashmina at Val Thorens – ask for a night in the igloo! Both these Trois Vallées ski hotels are posh, perfectly situated on the side of the slopes and you can walk to après ski or just enjoy the hotels’ amenities!

2. Paradiski in The French Alps 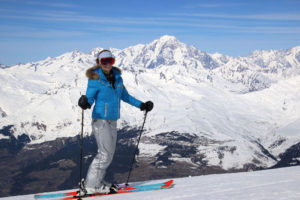 La Plagne and Les Arcs are both big resorts and now they are under one massive Paradiski name with over 400 kilometers of terrain. The Vanoise Express, a double decker cable-car, connects them. Neither resort is super charming, but the skiing is vast and there’s good value staying slopeside in a 1970’s vintage condo. Both La Plagne and Les Arcs have tons of high altitude prepared slopes and some pretty wild off pistes offerings on the steeper summit terrain.

3. Portes du Soleil  Switzerland
Portes du Soleil is a dozen ski villages interconnected, bordering France and Switzerland in the spectacular Dents Du Midi region, with 600 kilometers of skiing, over 200 ski lifts, 10 terrain parks and too many off-piste possibilities to list. Only down side is its lower elevation, topping out at 2,277 m. 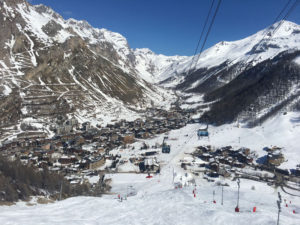 4. Espace Killy France
Espace Killy is the ski mega resort combining legendary Val D’Isère and Tignes with 99 lifts, 236 kilometers of prepared ski trails, and thousands of acres of off-piste terrain including several glaciers up to 10,000’. The medieval mountain village of Val Isère is charming, while Tignes is more 1970’s mod. 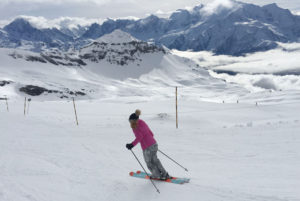 not grand in altitude, but it sprawls, and the views of nearby Mont Blanc from Tete Des Saix, at 2204 meters, 8,400’, are splendid.

What’s Best about Grand Massif: We like the alpine charm of the historic pedestrian village of Samoens for lodging, more than the utilitarian base area of Flaine – which is more central to the skiing. Best ski to lunch is in Samoëns – La Luge à Téran and L’Igloo for traditional Savoyard cuisine and beautiful views from their terraces.

6. The Milky Way – Italy
Bordering Italy and France, this huge interconnect of 7 ski resorts, called Via Lattea – or Milky Way – with 71 lifts and over 250 kilometers of trails. Sauze d’Oulx, Sestriere and Torino in Italy, and Montgenevre in France are the biggies. The Milky Way is a mix of old and new lifts, banal lodging architecture, and long runs (pistes) with lots of chalets serving delicious French and Italian food along the ski way. We love to ski Italy, or as some call it “Eataly”.

Best Run at Via Lattea: Monte Fraiteve’s 2006 Olympic downhill run in Sestriere is a fame to claim. 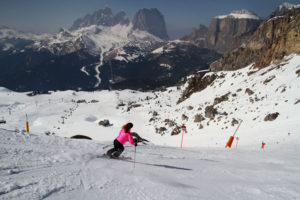 7. Sella Ronda – Dolomites Italy
The Italian Dolomites skiing offers dramatic views and that dolce vita ski lifestyle. This part of Italy is home to the world’s biggest lift pass, The Dolomiti Superski pass to 450 lifts and over 1200 kilometers of pistes, not all interconnected however – it actually encompasses 12 ski regions and 45 villages! The Sellaronda is a world-famous ski tour that circles the great massif Sella, a circuit you can do in a day, with about 14 lift rides, 26 kilometers of skiing, and about 6 hours to complete the Sella Ronda. That’s not accounting for a time for a relaxing lunch at an Italian chalet on the way. The best aspect is the Marmolada cable car bringing you up to 3,296 meters, for a panorama and a long ski run down the Malga Ciapela for a whopping 2,000 meter vertical drop.

Where to Stay in the Dolomites: We love the historic Italian ski towns of Cortina , Corvara, and Val Gardena. In Cortina- stay at the Hotel Cristallo, in Corvara the Hotel La Perla is posh, and in Val Gardena Ortisei – Hotel Adler is perfectly positioned near the slopes, the shops, and après ski, with a beautiful spa! 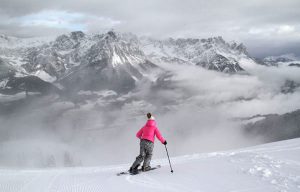 . Skiwelt Austria
Austria’s largest ski area is not St Anton on Kitzbuhel, but SkiWelt, with 90 lifts linking nine villages. It’s a great ski resort for families, with a top ski school, modern lifts, and tons of intermediate terrain, and also home to some of the best ski lifts anywhere.

8. Zermatt Switzerland
Skiing Zermatt is historic and huge, with high elevation terrain- up to 12,791′, 53 ski lifts, and a big bustling ski village at its base. Zermatt has an impressive 7,477’ vertical, and 153 miles of trails, plus tons of off-piste, oh and you can ski to Italy – Cervinia! We love Zermatt for the views, the 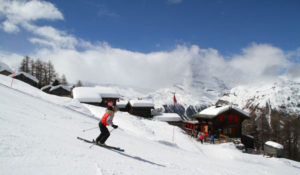 terrain, the amazing lifts – trains, trams, and gondolas, and the Swiss chalets on every trail!

Best Chalet at Zermatt: Hotel Cervo is right at the base of Zermatt’s ski slopes, has a rockin’ après ski scene, and beautiful alpine mod guest rooms.

Best Lunch at Blackcomb – Christine’s  at the top of the Solar Coaster in the Rendezvous Lodge offers an amazing stable-service menu with incredible views of the steep chutes and off piste on Blackcomb Glacier. 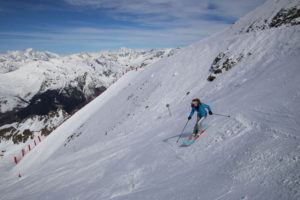 Whistler Blackcomb Bonus: If Whistler’s 8,171 acres of skiing, and wild après ski in the Village isn’t enough, there’s also Whistler Heli-skiing and Cat-skiing beyond the in-bounds and off-piste skiing.

See our Top Family Ski Resorts in the World!
and Top Ski Lifts in The World