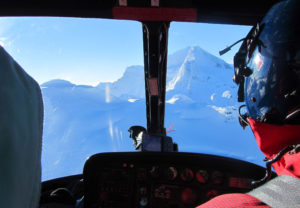 Heli skiing with Bella Coola in remote British Columbia was extreme, exciting, and epic as my highest expectations. I had dreamt of what a heli-ski week in the remote BC mountains woudl be like…. it surpassed my expectations.

Heli skiing is nothing like resort skiing, no crowds, lifts, trails or access roads, that’s what makes it so unique and unspoiled. First, there is the hurdle of getting to the wild high alpine reaches of Western Canada. We flew to the 2010 Olympic host city of Vancouver , stayed the night at the luxurious Vancouver Fairmont Airport Hotel, to fly the next morning over Whistler and the astonishingly beautiful Pacific Coast mountains to Bella Coola, midway between Washington and Alaska. 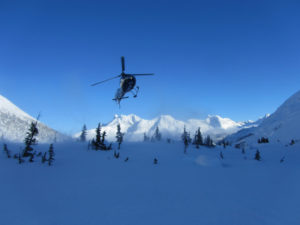 Meeting our guides at the heli hanger -our safety briefing began with transceivers, probe and shovel, and the Avalanche air bag we would trigger if caught in a slide. Safety is serious when heli skiing in high alpine backcountry, miles from civilization. You better pay attention, and quickly develop trust and respect in your guide, pilot and new heli ski mates. BTW:  I was also the only woman heli skiing in our group so I knew I better “represent”.

Contemplating the dangers of heli-skiing, my pulse was racing, but we soon boarded our helicopter with two snowboarders from Austria, and we were soaring over snow capped peaks in our A-star B2 chopper, the Porsche of helicopters that would be our private ski chauffeur for the week. 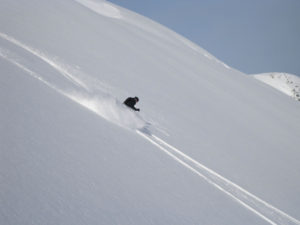 I knew heli skiing would be a rush, but I hadn’t anticipated the exhilaration of the helicopter rides. The pilot zooms over jagged 8,000’ mountain peaks, and touches down on a summit knife’s edge. You step out into a flurry of snow with the whirl of chopper blades overhead, huddle with your group until you are left to silence, just your gear and your guide, and 4,300 square miles of snowy alpine peaks as the helicopter disappears. 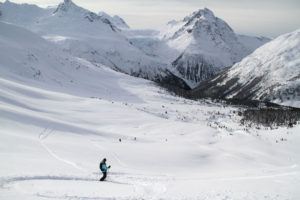 Bella Coola Heli Sport has the largest ski tenure of any heli ski outfit in the world, 2.6 million acres of exclusive terrain, bigger than the Swiss Alps. Conversely it is one of the most intimate heli ski companies with just 15 skiers sharing two helicopters and a 60-acre resort based in the magnificent mountains, where you are catered to be a super attentive staff. 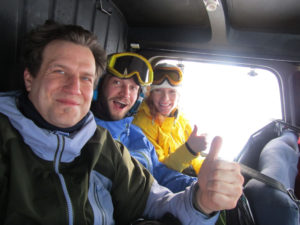 This private resort for ski film crews like Warren Miller and Doug Coombs, and crazy base jumpers Shane McConkey and Luigi Cani, has now become one of the most posh heli ski resorts in Canada. While other heli ski operations based in British Columbia’s inner mountain ranges serve the masses (Mike Wiegele and CMH), Bella Coola hosts 15 skiers a week in private cabins with the 1929 gentlemen’s camp – The Tweedsmuir Lodge as the luxurious gathering place for gourmet meals and après ski around the grand fireplace. Other smaller heli ski outfits include Purcell Heli Skiing in Golden BC near Kicking Horse and Eagle Pass Heli Skiing in Revelstoke. 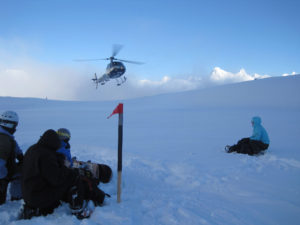 Heli skiing has its ups and downs, literally. You are up and down, in and out of the helicopter ten to twenty times a day. You ski everything from windblown snow on the exposed summits, to deep powder, glaciers, and snow soaked glades, often all in one 3,000’ vertical run. The beauty of flying in an A-Star helicopter, our pilot and guides had access to over 900 runs among seemingly endless territory for our group of four to track up.

Your helicopter approaches just as you catch your breath and admire your tracks at the end of each amazing run,  to whisk you back up for more untouched snow and magnificent scenery which resembles the Alps – only without chalets or chairlifts in sight. 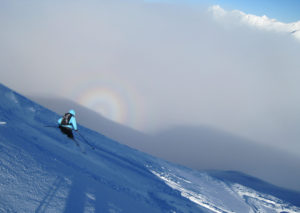 Warning: there are down days to heli skiing, and we had a few due to low clouds hampering helicopter visibility. You can fly fish in the river, enjoy yoga and a massage, play billiards or board games, watch a ski flick – many of which were filmed at Bella Coola, or just relax by the fire with a book or wifi. During down times and lavish dinners, you bond with your new heli ski buddies. Our Austrian snowboard heli-mates are now lifelong friends, given our shared adrenaline charged adventures on the hill and laughs in the lodge. 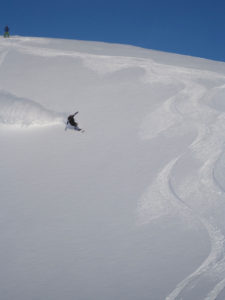 My heli skiing fears are over. I can see how skiers get hooked on the expensive heli-ski habit. After having millions of snowy acres to ourselves, it’s hard to return to the confines and crowds of the average ski resort. I was also reassured that safety is top priority, with the guides’ constant snow pack and avalanche analysis, I can make the educated argument that you are safer heli skiing than driving to a ski resort, or skiing a busy trail.

Heli skiing comes with its risks, but huge rewards too. While some operations claim you need to be intermediate, I strongly recommend you be an expert skier or snowboard to properly appreciate and conquer the terrain, and not hold your group back. The cost is high, but so are the hi’s when you fly to a fantastic peak, and ski deep fluffy untracked snow, shared with four to five newfound friends.