Hochzillertal-Hochfugen is one of the largest ski areas in Austria’s Tyrol, and its the first ski region as you arrive in the Ziller valley– hence the name Zillertal First. Hochzillertal-Hochfugen offers skiers 78 kilometers of prepared trails, and 37 lifts with a base village of Kaltenbach – this ski area is also called SKi Optimal. You start your ski day in Kaltnebach riding one of two gondolas up to mid-mountain. 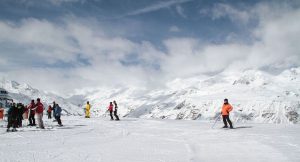 Hochzillertal – fun ski terrain, wide open ski slopes served by swift 8-passenger chairs, the Schnee Express with a yellow bubble, cover, the Sonnerjet bubble chair, and the Kristal Express. A very popular terrain park, Fun Park, has its own lift and big kickers on the upper mountain. Hochzillertal has extensive ski lesson programs too. The view from Hochzillertal’s top of the appropriately named Panoramalift is fantastic, you can see nearby ski resort Mayrhofen. Hochzillertal has plenty of off-piste between the prepared ski runs, easily reached on this sunny side of the mountain. 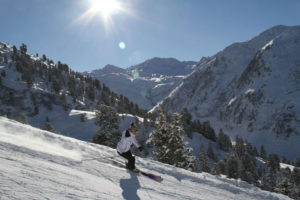 Ski Hochfügen in the afternoon, for afternoon sun on its north facing slopes, where the snow and temperature stays colder. Hochfügen has a few long well-pitched runs served by two more gondolas – the Zillertal shuttle and 8er Jet, and more quads and six pack chairs, plus a few t-bars. Hochfügen has tons of off-piste, in addition to the groomed “prepared’ slopes, hire a guide and have avalanche gear as the slopes here are slide prone. You will see avalanche safety check stations at each summit, giving current warnings and a safety check for transceivers.

From Hochfügen, you can see the neighboring ski resort Spieljoch, they are so close they could connect but environmental issues and the terrain between has not made it simple. So instead it’s a ten minute bus ride or drive from the Spieljochbahn or Fugen to Kaltenbach or Hochfugen. Hochfügen has its own small base village with a few ski hotels. 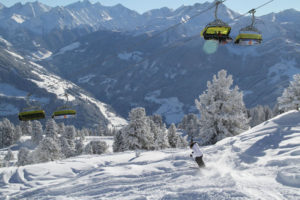 highest summit of 2,500-meteres, 8,202-feet, is extraordinary with fantastic food, a gorgeous setting, fireplaces, and a big sun deck. You can actually lodge overnight at the 5 star Wedel Hütte in a spectacular top floor suite. The Krystal Hütte is another impressive chalet atop the southernmost Panoramabahn with a huge scenic sun terrace looking toward Mayrhofen and Hintertux, there’s inside dining at Krystal as well.

Hochzillertal’s long trail #1 is your last run down to Kaltenbach ending at the Stephen Eberharter’s big finish line. The popular Austrian ski racer, and Gold medalist, grew up skiing here and is now Ski Ambassador. At the base of Hochfugen’s slopes are several après ski bars. Hochzillertal-Kaltenbach also offers night skiing on Fridays, for just $10 Euro.

For lodging while skiing Hochzillertal, you can stay nearby at Mayrhofen, or Fügen at the four star Hotel Schiestl at Spieljoch ski resort. Hintertux Glacier, Mayrhofen, and Zillertal Arena are on the Ziller super ski pass and within a half hour drive or free bus ride with your ski pass. A family ski week in Austria’s Ziller Valley is easily reached from Innsbruck or Munich.