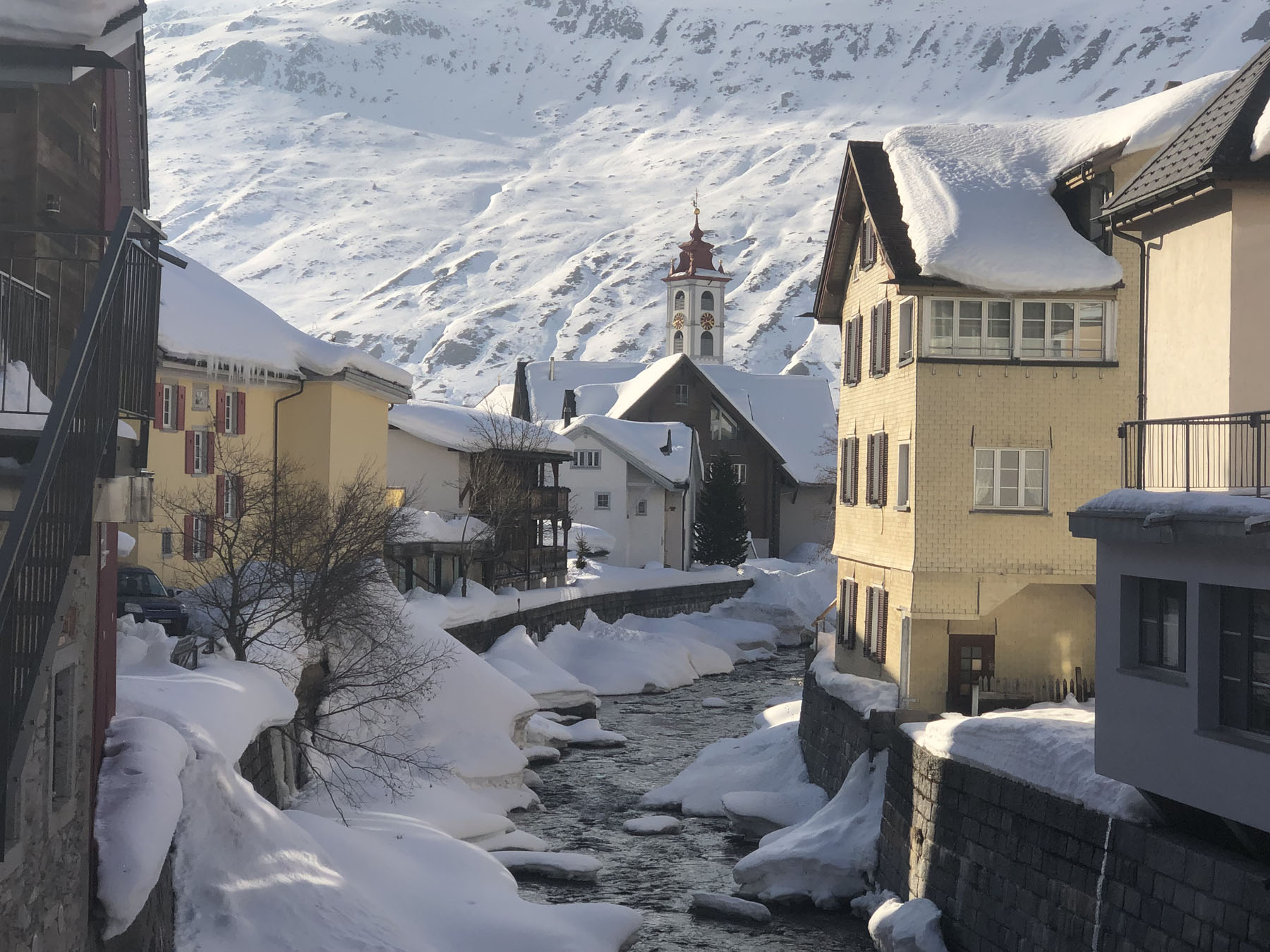 Andermatt-Sedrun is in central Switzerland in the heart of the Swiss Alps just 90 minutes from Zurich, midway along the Matterhorn Glacier train which travels from Zermatt to St Moritz. Andermatt’s beautiful and charming alpine village dates to 1382, and iss one of the prettiest perfect sized ski towns with big skiing above the narrow cobblestone stone streets, wood shingled chalets, arched Devil’s Bridges, and churches, charming in the leagues of Saas Fee, Wengen or Austria’s Kitzbuhel and St Anton. 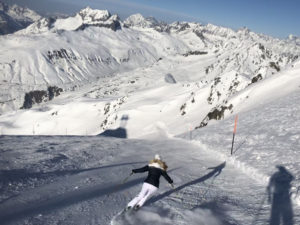 SkiArena Andermatt Sedrun has grown dramatically in recent years and now offers 120 km of prepared pistes (groomed trails) with three regions linked by the Oberalp train. There are 22 lifts – many of the new modern variety and few old reliable. Gemstock is the highest summit topping out just shy of 3,000 meters.  Gemstock is a steep north facing mountain across the valley and village from the more modern Andermatt to Sedrun interconnecting south facing terrain with its sunny wide slopes, ideal for family skiing across five peaks and unique ski valleys. Well-groomed pistes, mostly red/intermediate, and a few family ski zones and terrain parks, descend to consecutive high-speed six-pack bubble- covered chairs and a few gondolas.

You can holiday for a week around Andermatt skiing across Oberalp Pass to Sedrun. Ski school is popular here, as is sledding – fast and fun on groomed routes. The Alps surround you in all directions – in a most spectacular fashion. 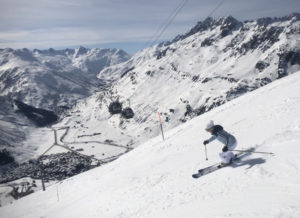 Andermatt has received a vast influx of cash in recent years from its new owner (since 2010), Egypt’s wealthiest family. Samih Sawiris has spent $1 billion Swiss Francs on new gondolas, bubble covered six packs, summit lodges, and  the posh new 5-star Chedi Hotel and Andermatt Residences, with plans for more resort improvements and development. Locals seem to approve of this influx, putting Andermatt back on the map as a top ski destination by connecting the ski region with new lifts, and improving lodging and the village’s vibrancy – which has just enough shops, restaurants for fondue, pizza, or schnitzel, while maintaining its historic charm.

For free skiers and experts, Gemsstock is a true EXPERTS only mountain, served by two consecutive trams, one six pack chairlift, and one of the steepest T-Bar I’ve encountered (scheduled to be replaced in the coming years). Gemsstock has a handful of marked prepared trails, skiers left is the red valley (with ONE intermediate route to the mid station) and skier right is the black valley (with 2 prepared piste expert runs).

Don’t Miss… Exiting the summit tram, go to your right up the stairs to the viewing platform atop Gemsstock where it is said you can see 500 peaks (I didn’t count). 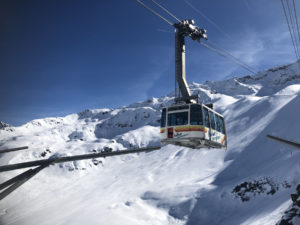 As it is just one of 3 prepared pistes, you’ll be sure to ski Bernard Russi’s black run #71, named for the famed Swiss ski racer. Andermatt’s Gemstock has so much more to explore, hire a guide to ski the steep off piste routes from the jagged summit, 360 degrees of wild all-natural passages like Felsental, Giraffe, and Hinter.  If you are an Intermediate skier you will enjoy the one red trail off the summit and the new modern mid-mountain 6-pack chair, but be sure to download the lower mountain tram as the only way off the upper mountain is a true double black run with a pitch the likes of White Heat at Sunday River or Bear Mountain at Killington.

We like Andermatt for its authentic ski village, sunny family-friendly slopes of Andermatt to Oberalp Pass to Sedrun, impressive new ski lifts, plentiful chalets for lunch, challenging terrain on Gemsstock, and the spectacular Alps views throughout this beautiful ski region in Switzerland. 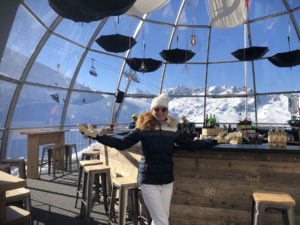 Gemsstock’s GADA Bar is an authentic mountain hut, really a barn at the base of the challenging Lutersee Lift. You can dine outside in the sun at a picnic table or inside by the fire on sheepskin chairs or in a cow stall. Seriously, we dined in Olga’s stall – surprisingly tidy with wood floors and walls with Olga the cow’s name above her coral. The Rosti is a rustic cheese potatoes dish – delicious, so is the mixed salad- so fresh and crisp at 2,000 meters in elevation.

Igloo Bar mid mountain at Gurschen is actually 360 of glass panels and a circular bar with amazing views next to the Gemsstock tram connection station. The ironic upside umbrellas make it an umbrella bar, Swiss humor.

Ustria Alpsu on the Natschen side at Oberalppass has great homemade Swiss fare served inside the chalet or out on the sun terrace. Its next to Switzerland’s only lighhouse, at the highest point of Oberalp Pass where The Matterhorn Glacier Train passes. 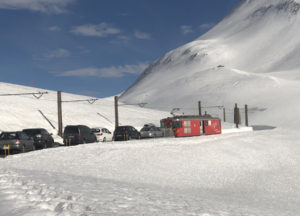 Andermatt Après Ski Train is cool, running from Andermatt, to Disentis and Sedrun, so you can have drinks and a train ride with a view if you prefer versus skiing back, weekends there’s a DJ, and the ride is included with ski ticket for the SkiArena Andermatt.

Where to stay in Andermatt
Hotel Aurora Andermatt is a cozy 3 star budget lodge next to the tram at Gemsstock, and a short shuttle to Natschen lifts. Its not luxurious, needs a décor update but the location can’t be beat, right in town, with the Jodelwirt bar and restaurant downstairs for lively for après ski and causal dining. A hearty breakfast is included daily, there’s no spa or sauna, its 70s vintage, but its homey, with beautiful Alpen glow views, and its the pace to be après ski on a sunny day, while the kids play and sled on the slopes. 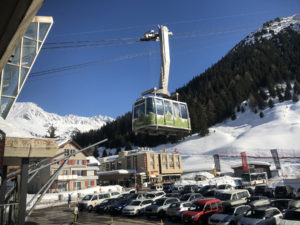 River House in the heart of Andermatt village is mid-range with a great in town location, clean well-appointed rooms, and a wonderfully cozy aprés ski bar and restaurant – Alt Apotek.

Chedi is the 5-star luxury lodging in Andermatt, with a huge spa Bereich, thanks to Andermatt’s Egyptian owner. Chedi is closest to Natschen’s ski lifts, and the train station, Chedi’s private shuttle will take you the ski lifts, or the village for dining and shopping.

Dining in Andermatt
Hotel Sonne is a classic Swiss bistro for fondue, so typical and traditional as you dine by candlelight and wooden window sills lined with handmade lace drapery.

Il Fermento is a vibrant Italian bistro with a cozy bar, in the village center, serving pastas and wood fried pizzas.

3 Konig & Post Hotel is perfect for a more upscale aprés, perhaps gluwien, fancier than the casual sheep skin bar stools at Jodlerwirt. Here you are served by men waiters on the sun terrace overlooking the village, with a menu of pizza, pastas, and local specials in this old school elegant hotel by Devils Bridge.

Andermatt is near Laax, Obersaxen, Brigels, Savognin, 100 km to Zurich.