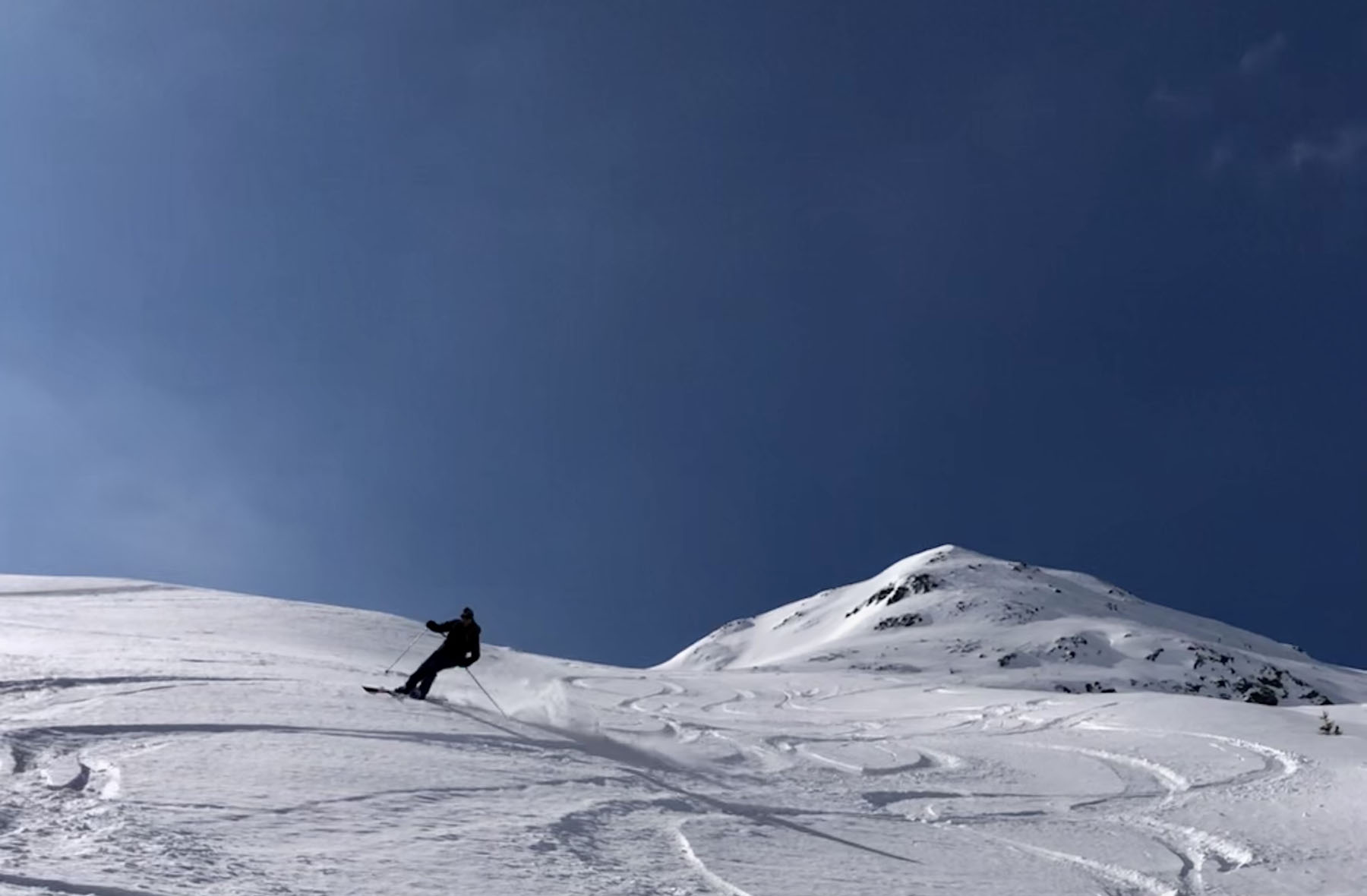 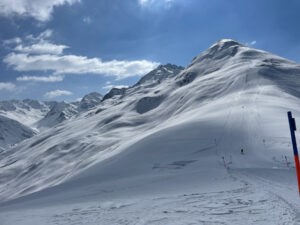 Davos and Klosters are reputed as top Swiss ski resorts, the winter holiday haven of royals, and a huge ski region that spans several valleys and villages. In the spectacular Swiss Alps, Davos Klosters is actually several ski areas, all on one ticket, with a total of 54 lifts and 280 kilometers of high alpine skiing.

Here’s your guide to skiing Davos Klosters, located in eastern Switzerland near St Moritz, and Arosa Lenzerheide, it can be part of a Swiss ski safari, or enjoyed all on its own, under two hours from Zurich. 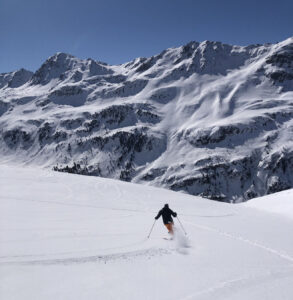 Davos Klosters is the centerpiece skiing mecca called Parsenn – reached from either Davos or Klosters village. The highest point is Weissfluhjoch reached by three-consecutive cable cars to 2844 meters, 9,300’. Skiing from the panoramic Weissfluhjock to Kloster village is 7.5 miles and over 5,500 vertical feet! Or ski the Nostalgia Run from the top 8-miles all the way to the charmingly small village of Kublis.

The beauty of Davos Klosters is its vast skiing, stunning Alps scenery and varied terrain on all sides of the valley. High capacity cable cars and a funicular connect both villages to long groomed runs at Parsenn, where you will ride swift chairlifts lifts to high-alpine above-tree line slopes.

The On Mountain Hut scene is fantastic at Davos Klosters – a dozen charming wood chalets plus modern lodges with huge sun terraces await you with hearty homemade fare, or a midmorning café and pastry, or a fortifying Alps ski drink. There’s even an Igloo hotel on Davos Klosters main slopes, where you can enjoy a Swiss fondue lunch inside the IgluDorf, or chill out with a cool drink at the Igloo’s ice bar, or spend the night “on ice.” See our review of the Top On Mountain Chalets at Davos Klosters for lunch and après ski. 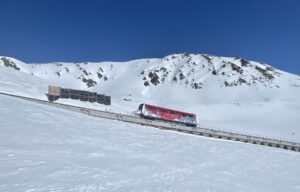 For powder skiers, endless opportunities to go off-piste exist, at Parsenn, and Gotschna on the Klosters side. Venturing in to untracked side-country its best to hire a Mountain Guide given the size and aspect of avalanche prone slopes. Prince Charles lost his best friend here in an avalanche.

Your Davos Klosters ski lift ticket is also valid for trains and buses within most of the ski network. But be sure to check when boarding, as we incurred a steep 200 Swiss Franc fine for riding a bus after an epic off-piste run from Rinerhorn. The bus fare, had we known, was only 4 Francs, but there was no forgiveness for our mistake.

Madrisa is a sunny, family-friendly are stemming from Klosters village with half dozen fun undulating mellow ski runs served by a speedy bubble covered six pack, a double, and a an upper tbar.

Jakobshorn is a more retro ski area emanating from downtown Davos. A summit tram, and several upper mountain lifts serve interesting trails, lively chalets and bars. Jakobshorn is popular with the younger crowd for its terrain park and the party scene at the top and bottom of the mountain. Plus Jakobshorn has night skiing certain nights. There’s also some awesome off-piste skiing on both flanks of Jakobs’ horn. 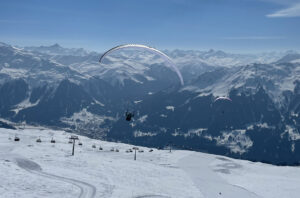 Rinerhorn is quieter, with some great long trails served mostly by T Bars once you’ve ridden the Tram from the base near Davos.

Pischa is an alternative ski area, with just one old tram, and no true groomed ski trails to speak off. Pischa is a no-frills playground for ski touring, off-piste skiing, rodeling ( sledding), snow biking and winter hiking. Locals call it “the forgotten mountain” and it feels eerily like it may not survive.

Where to Stay at Davos Klosters
Davos is the bigger “ski village,” truth be told more of a city, not quaint as you’d expect in Switzerland. In fact Davos is the highest elevation “metropolis” in the Alps (at 1560-meters). It has an urban feel with unfortunate architecture of dormitory style buildings, concrete malls and sprawl. Davos’ claim to fame is hosting the annual World Economic Forum (code for big money discussions) so hotels are large and expensive. The finest 5-star Seehof is steps to Parsenn’s Funicular. There’s a Hard Rock Davos, a Hilton Garden Inn, both good proximity to that lift, and to Jakobshorn’s ski area tram across town.  AlpenGold Hotel Davos looks like a giant shiny Easter egg overlooking the town, it is 5-star with great balconies. 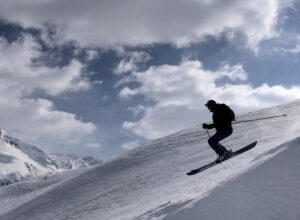 Klosters is much more of a classic Swiss alpine village. This is where Prince Charles and the Royal family ski, and stay at Chalet Eugenia (you can rent it for 150,000 Swiss Francs a week). Old wood chalets line Klosters’ inviting streets of boutiques, cafes, and a few attractive top Swiss ski hotels like at four-star Hotel Vereina and Piz Buin.

Chesa Grishuna is Klosters’ storied old chalet, restaurant and hotel, where celebs have dined for decades. Go to Chesa for a drink in the cozy bar, then dinner of Veal Zurich surrounded by history and the well-heeled of Swiss ski country. As one Britt said, “Klosters doesn’t have the best of anything, but it has the second best of everything”. Not sure that is entirely accurate but Klosters is very pretty, also rather pricey.

Kublis is another ski lodging town, much quieter at the end of the ski valley. Hotel Terminus is right by the train to whisk you to the ski slopes 20 minutes away, and steps to the village’s church, market and bakery. Mid winter you can ski back via the 8-mile “Nostalgia Run #1” from the summit to Kublis end of day – named for the first winter sports enthusiasts who skied here in 1904. Imagine their discovery of this terrain over a century ago, on much more rustic equipment with no lifts or groomers. This ski back trail is usually finished by mid-March.

Other nearby ski resorts are St Moritz, Arosa Lenzerheide, and smaller resorts of Bivio and Savognin you could include in your Swiss ski trip.