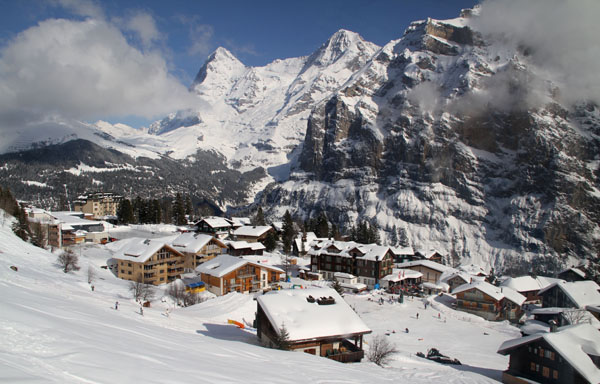 The idyllic village of Mürren is located in the middle of the ski area, high above the picturesque valley of Alps, with many ski-in ski-out hotels and lodges. Murren has 54 kilometers of prepared ski slopes and views of more than 200 alpine mountains surrounding it.

The best place to capture the view is at the Piz Gloria, the revolving restaurant at the Schilthorn summit. This amazing panoramic lodge was featured in the 007 James Bond movie, “Her Majesty’s Secret Service.” It takes 55 minutes to complete the 360-degree full rotation at the Schilthorn Piz Gloria, perfect for a scenic leisurely ski lunch. Save some time for a peek at the Bond 007 Exhibit downstairs at the peak too, then enjoy the famous black diamond ski run Bond descended in the film all the way down to the Engetal below Birg.

The Schilthorn is famed for its mountaintop lodge, the stunning views and the almost century old ski race, the world’s longest downhill called the “Inferno” which started in 1928 and continues to this day with over 1,800 ski racers competing.

Mürren is a postcard perfect ski village, with just a few charming Swiss hotels, chalets and resturants. Staying here in this car-free village after most skiers descend the tram and train is magical.

The terrain at Mürren Schilthorn offer the well-groomed slopes you come upon Swiss chalets serving lunch and cheese storage huts where farmers keep their summer milk from grazing cows. The Schiltgrat and Winteregg detachable quad lifts off some of the best long, intermediate and advanced cruising terrain. Its an interesting mix between the James Bond World at the summit, the revolving 360 restaurant and glass Sky Walk, even kite skiers launching, to the pastoral alpine scenes as you descend into the valley of Lauterbrunnen.

Jungfrau Stats: 9,744′ highest summit at Schilthorn, 6,888′ vertical, 44 lifts connecting four Swiss towns with gondolas, cable cars and trains, 224 kilometers of trails. The other two ski areas of the Jungfrau are The Wengen’s Kleine Scheidegg-Männlichen – the largest, and Grindelwald-First which is the most family friendly terrain.

Traveling to The Jungfrau: Fly into Zurich, take the Train to Lauterbrunnen, then Grindelwald, Wengen or Műrren, about 2 hours.